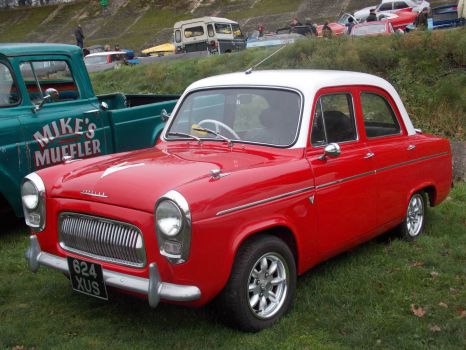 I'm not that sure either, LODU. Trouble is, it's so long ago and memory fades!! They were all so similar, and I think that either the photo or the caption is wrong - it can't be both. Having said that, my Alsation dog was always allotted the back seat, and I don't remember him having to get there via the driver's side, so mine must have been a four-door. The Reg No (believe it or not) was 321 CZ if my memory is not entirely at fault.

@jet491
Looks like "Anglia" was for two-doors and "Prefect" for four-doors coaches.
the "Popular" was to name a low-cost version, but it's unclear and I can't be sure.

Any idea how this car compares to what I had (my first car) known as a Ford 'Anglia' I had a '59 2-dr Anglia while on military duty in Crete. I think I've posted on a similar car on here not long ago. This sure looks a lot like mine, although it was black. At the time mine was only 10 yrs old, so it was running well and no complaints from me.
Funny occurrence in late summer, as we'd been out for a spin in the countryside, heading back toward Iraklion. Farmer heading to town with his big basket overflowing with grapes. He was probably headed in for an evening and suspect the grapes were his stake to some spirits. We gave him a lift and he became a bit of clam meat as he piled into the back seat and as we rode into town he was passing bunches of grapes onto my wife's lap. By the time we dropped him off, she had a huge pile of grapes and could barely get out to get the seat pulled forward for him to exit. Well, we made raisins out of many of the grapes, which is what the local folks did with them, drying in the sunshine. Fun times with the little Ford!

my first car was a fiat millecinquecento=1500. was fast but after about a year of my treatment the crankshaft broke in half, so I had to buy a motor from a breakers yard. drove for another 2 years and sold it for a small sum [ don't remember how much ]

@Trenchman LoL ! I love those stories, we all had that not-so-good first car that gave us the freedom to go !

@leonsr43 Yes, I read "popular" on the hood. It may be a mistake from the original poster on flickr. Ask him the question.

My very first car, a 1962/3 E100 that cost me £45 4th or 5th hand! Can't remember the size of the engine, but it was side-valve engine with three gears, column shift. I had it for only 3 weeks because it was using more oil than petrol - and it couldn't get much past 40mph! Changed it for a Hillman Minx 1600 and kept that for about 6months until the back springs came up through the boot! Heyho, it was fun learning to drive without a licence!!