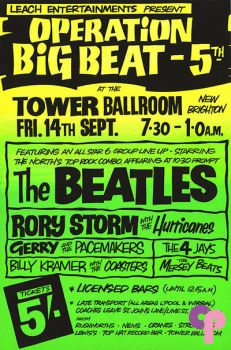 The Tower Ballroom in New Brighton, Merseyside England was the venue for this early Beatles performance on September 14, 1962. This show marks the first time that the new drummer, Ringo Starr, played with the band. He had previously worked with Rory Storm and the Hurricanes. The original posters for this show are extremely rare... only three are known to exist. The artist is unknown.

Gerry and the Pacemakers - https://www.youtube.com/watch?v=NnQ8ItF_Kqs

Rory Storm and the Hurricanes - https://www.youtube.com/watch?v=9MMeUe8p9jc&list=PL9SnGB81Fqj0kvK_gRG0MgPPrwlsqnQ0r

Nogginthenog - love your Avatar, but think I have a new earworm now !!(❀ᴗ❀)

artist was tony booth , I think he lived in new brighton .

Got this off Wikipedia:
The record was named after the Telstar communications satellite, which was launched into orbit on 10 July 1962. "This was one of the first sci-fi-influenced pop songs," observed Tim Wheeler of Ash. "For its time it was so futuristic and it still sounds pretty weird today."

The song was re-recorded in 1975 by four of the original Tornados members - Clem Cattini, Roger LaVern, Heinz Burt and George Bellamy - who briefly reunited as the Original Tornados.

Thanks John for the video - it was great to see. Heinz, the blonde dude broke away from the Tornados and became very well known on his own. Clem was on drums. (❀ᴗ❀)

We knew the lads very well, Clem was the lead - good guys - I believe they're all still around except for Stuart who lived near us in London, and died many years ago. (❀ᴗ❀)

Bub, it sounds as if you lived a charmed life, rubbing shoulders with the icons of rock and roll. I thought The Tornado's Telstar was a great song that paved the way for other greats instrumentalists… like the Chantays, The Surfaries, Dick Dale and of course the Ventures. Wasn't Telstar the first British rock song to make it to #1 in the US? Something like that...

I agree, John, its not very artistic or inspirational but how about this, guys. Way back my cousin worked for the biggest pop music manager in the business, and she knew all the pop groups that he managed at that time. So we were very friendly with the Tornadoes and would go along with them to gigs, as friends. At gigs, backstage we would see all the other artists of the day, Brenda Lee, Jerry and the Pacemakers etc. An exciting time - my cousin went on to other work but I've never forgotten the people I saw backstage and still hear Telstar on the golden oldies (❀ᴗ❀)

Can't say too many good things about this poster. If I was the artist, I would stay anonymous also. At first glance I thought it was a ticket stub. I think if you took a traffic citation issued in San Francisco in the early 60's and had it colorized, it would look much like this 'poster'. Apparently psychedelicization had not yet reached the English shores in 1962. But fear not little Canuck, by the late 60's a cure for psychedelicization was discovered by several scientists in the U.K.. Working simultaneously, Tom Jones and Engelbert Humperdinck were able to squash the psychedelicization epidemic and soon people all across the U.K. were once again eating Cream of Wheat, prunes and Metamucil. And they lived happily ever after...