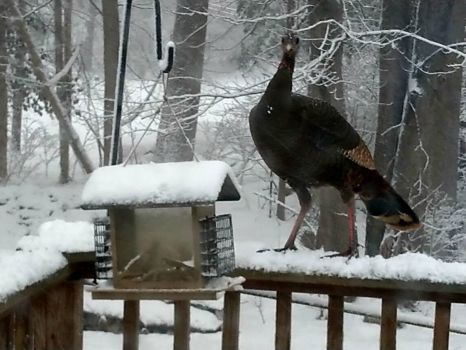 No wonder the bird feeders keep going down so fast....
Created by skpy Published 13. Mar 2018

Jals, Do you mean Tiny Tim, he sang over the rainbow, he has passed on... But was born in Manhattan. I really liked his version of that song. Fay.

I don't think I ever heard of him before. Beautiful rendition!

Good guess, but now. This guy
https://youtu.be/V1bFr2SWP1I
He's passed on now, I believe, but the world loved him.

I probably should! I bought them corn last year, and they wouldn't touch it!

Judy, could it be Don Ho?

Mine was The Pink Panther theme, now it's Somewhere Over the Rainbow, the one that Hawaiian guy sang. Can't remember his name.

Mine is an owl right now!

My brother in law's ringtone is a turkey. Always startles me at first. lol

They have before but before I could get the camera out, the dog had scared them off. I was amused the other morning. I was walking the dog at 5:30 and suddenly heard turkey gobble sounds. It was early and I wasn't really all with it. My first thought was, 'Who's calling me now?' (I have animal ring tones on my phone. Then I thought, 'Hang on, I have turkeys in the neighborhood.' I looked around and there were two Toms showing off for a hen. She did not seem impressed....

LOL
No wonder the feeders are going down fast is right!
That is funny, Sarah!!
We have turkeys around here but I've never seen them in our yard. Saw a rooster pheasant a couple of times. So funny he came right up to your feeder.

My bird is bigger than yours!