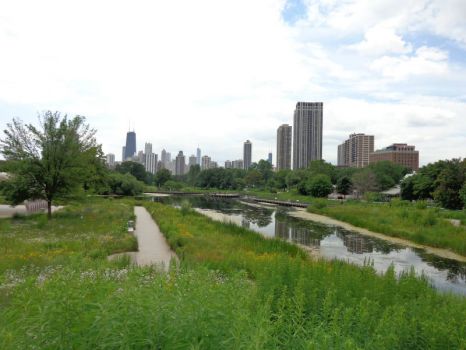 The down of it all is having to drive downtown Chicago!!! Could never handle the traffic on a daily bases....and I wasn't even driving!!!
Created by lyndee Published 23 July 2015

I think it's a beautiful city!

Yes Florrie, I do think a lot of the residents of Chicago use public transportation. We debated if wanted to take the train or drive and decided to drive as we don't know the public transit that well....the red line, blue line, brown line, trolly, public bus....too many decisions!!!!

LOL Barb, you went from one extreme to the other! I was raised in a town of 1500 so I'm not much of a city girl, however, I do like what the big cities have to offer.

Lyndee, that was my mother. She wanted to live in the very middle of Chicago downtown.....◔‿◔ And I wanted to move to the country and so I did, moved to the jungle of Florida....LOL

Thanks Diana.
I agree Barb as far as living there. However, I know of some people that wouldn't live anywhere else!
Thanks Pumpkin. I too am happy where I am.

Nice shot of the skyline.....but I'll stick to the country.

We lived in Chicago for a short time and then moved to a suburb. Hated to go back and avoided it as much as possible....LOL

It's hard to fit into their traffic when you're not used to driving the way they do Ginger.
You might be right Morris.
You do good in St Louis Laura...I know it's not as big as Chicago, but it can also be a challenge!

I am from the big city, but have lived so long in the middle of nowhere that Chicago traffic is definitely a challenge!

Harvard is a bit North of you, but would be less traffic to get there.

Been there a few times just driving through and felt the same as you Lyndee. Nutty drivers and so very fast! Have never been downtown. Hugs ♥

Pat, I love the excitement of Chicago, but hate the traffic. Usually don't go further than the out skirts of the city.
Morris, we fine that Harvard works best for us. I don't know if it's closer than Crystal lake or not.

Great view, from the backside. :)
Where is the closest train station for you, Crystal lake?