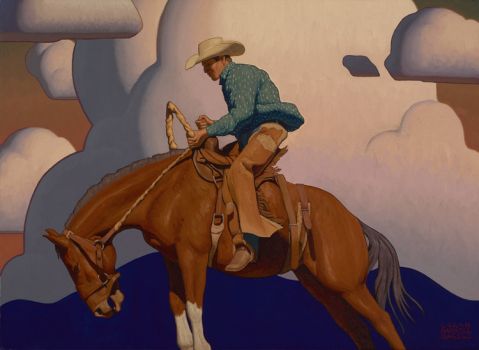 Logan Maxwell Hagege (pronounced Ah-jejj) was born and raised in Los Angeles. At 38 years old he has already become one of the most sought after artists in American Art. His classical training in fine art allowed him to depart from formal Realism and focus on modern design principles. He is known for his combination of techniques, focusing on contemporary Native Americans living in the Southwest, modern landscapes, bucking broncs, and other American relics. Hagege’s figures are situated proudly in stylized Southwestern landscapes, evoking contemporary standpoints while conjuring relics of the past. His signature clouds grace the many of his works, which silhouette the angular figures and more pronounced features of his Native American subjects. Hagege credits childhood trips to the California desert to visit his grandmother as early inspirations for his art. Hagege’s evolution from landscape to figure and now a combination of both was a natural progression in his art, which he continues to push to its limits in his own unique style. One idea that drives his work is that evolution in art is never ending. He is constantly challenging himself with new ideas and new ways of looking at the same subject. Today Hagege paints out of a 2,000 square foot studio in Old Agoura Hills, CA and splits his time between his mid-century home in Los Angeles, CA and a desert home in remote Arizona.
Created by oynot Published 15. Dec 2019