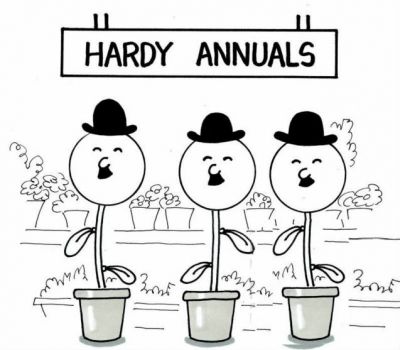 Which duo had an 80's hit with "Do That to Me One More Time"?
a) Sonny and Cher
b) Captain & Tennille
c) Karen and Richard Carpenter
d) Bryan Adams with Tina Turner
e) Aretha Franklin and George Michael
f) Mike Reno and Ann Wilson
Created by Stillmanic Published 8 January 2020

There should be some pots with Laurel in it between the Hardy Annuals. They go so well together.

Many thanks Bonnie, Rudy is crowing from the rooftop.

Give Rudy some organic grain for me :)) I have just taken delivery of 20kg/44lb of wild bird seed (no mess/no grow) should last about a month :))

Yes, if there are too many matches, you simply cannot take the time to spell them all out. Sloth math, therefore executes the equations in the background, allowing us to reach the conclusion much quicker than …….something slower.

Your alphabet has changed. I thought a) = b, b) = c etc or does it depend on certain circumstances?

In this case, by looking at the answers, you can tell that there are two flaws. Aretha and George should be A. Captain and Tenn, should be C.

My answer, c) Captain and Tennille.

No idea. Really not even interested. lol Thanks, Bonnie.

Looked it up. No wonder I didn't know it.

I know the answer and the one did not want to do it one more time.

Not as ashamed as I.

They are Nev, Hardy Laurels :))

Bonnie, are those plants Laurel trees?
Can't get the quiz. Know the song, but memory goes blank after that. ♥♥♥

Never ask a woman who is eating ice cream straight from the carton how she's doing.