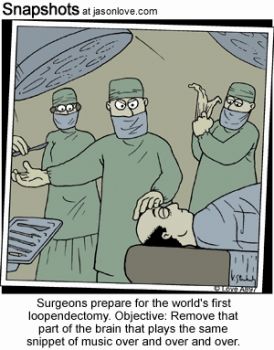 What do the letters CPU stand for when referring to the “brains” of a computer?
Created by Stillmanic Published 16. May 2019

He is doing well, he is still very scared, unsurprisingly, seeing that amount of blood come up. His blood pressure is still low so we are unsure as to when he will be able to come home. But he is in the right place. Thank you for all your kind words :))

How fortunate that he had someone right there to blow the whistle and get him immediate help.

What a scare! Please give your niece and her hubby a hug from me. They're heroes!

That was nice, Bonnie! I always hate to wake people.

It was a horrible day, glad when it was over. We went to the hospital to visit yesterday evening. He had the audacity to be sound asleep!!! We didn't wake him, because of the ordeal he had been through, but left him with a nice note and some flowers :))

Oh my, Bonnie. You've had quite a scare! I hope your dad recovers his stamina and can go home soon. It's great your niece and husband were there.

He made it :)) It was touch and go!! Dad feinted and when he came round and stood up he vomited, according to the paramedics, 2 litres (4 pints)!! of blood. Thankfully it was venal rather than arterial blood. They managed to stabilise him and got him to hospital. They inserted a scope into his abdomen to find the source of the bleed. There were worn patches on two of the veins in the abdominal area. They think that the damage occurred when he had the cancer removed (along with 80% of his liver) three years ago. They have 'fixed' the veins and gave him a transfusion overnight. He is stable at the moment. It's a good job my niece and her hubby moved in with him, he would not have survived if they were not there.

I knew you were busy with your dad Bonnie! How's he doing?

A central processing unit (CPU), also called a central processor or main processor, is the electronic circuitry within a computer that carries out the instructions of a computer program by performing the basic arithmetic, logic, controlling, and input/output (I/O) operations specified by the instructions. The computer industry has used the term "central processing unit" at least since the early 1960s. Traditionally, the term "CPU" refers to a processor, more specifically to its processing unit and control unit (CU), distinguishing these core elements of a computer from external components such as main memory and I/O circuitry.
The form, design, and implementation of CPUs have changed over the course of their history, but their fundamental operation remains almost unchanged. Principal components of a CPU include the arithmetic logic unit (ALU) that performs arithmetic and logic operations, processor registers that supply operands to the ALU and store the results of ALU operations and a control unit that orchestrates the fetching (from memory) and execution of instructions by directing the coordinated operations of the ALU, registers and other components.
Most modern CPUs are microprocessors, meaning they are contained on a single integrated circuit (IC) chip. An IC that contains a CPU may also contain memory, peripheral interfaces, and other components of a computer; such integrated devices are variously called microcontrollers or systems on a chip (SoC). Some computers employ a multi-core processor, which is a single chip containing two or more CPUs called "cores"; in that context, one can speak of such single chips as "sockets".
Array processors or vector processors have multiple processors that operate in parallel, with no unit considered central. There also exists the concept of virtual CPUs which are an abstraction of dynamical aggregated computational resources.

The word fair-haired is mentioned. In most people's vocabularies, that means blonde.

I'm sorry PW. I didn't think that at first. Sorry if I misjudged you.

Yep! That's what it is alright.

I don't know much about computers but did know that. Thanks, Joe.

Since Bonnie is off taking care of her dad, the answer is...........Central Processing Unit.

Well, what DOES it stand for?

(Sorry Ellen, BTW I am an ex blonde!)

Ha. In other words a blonde joke. I didn't catch that at first lol

PW's joke. The rascal! He does like to pick on "fair-haired people."

Ellen, what's the OMG for?

Put me in that long list of surgery clients.

Two bowling teams, one team all fair-haired and the other darker-headed charter a double-Decker bus for a weekend bowling tournament in Atlantic City. The doctor heard team rides in the bottom of the bus. While the lighter-haired team rides on the top level. The darker haired team gamble. I was whooping it up having a great time when one of them realizes she didn't hear anything from the light-haired team upstairs. She decides to go up and investigate. When the darker haired girl reaches the top, she finds all the light haired people frozen in fear, staring straight ahead at the road, and clutching the seat in front of them with white knuckles.
She says, "what the heck's going on up here? Were having a grand time downstairs.
When the light haired people looks up and says, "Yeah, but you got a driver."

I know this one. And sign me up for that surgery!

I don't know this one.

Oh I know this.

Got the answer below and think I know the quiz answer as well. Thanks, Bonnie.


The only true statement can be #4. The others are false. #5 can't be true, because it says all the statements are false.