Some of the Gang!! 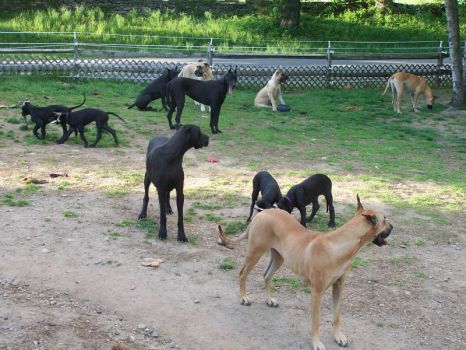 Do you mate them and sell their pups or just keep them all. Me, I'd want to keep them all, it would be too hard to let them go! haha

HAHAHAHAHA! That's so funny, usually they have one dog that is the Alpha bitch over the other's, or were you just jesting with me?

Thanks Monica. Everyone gets along fine. They all realize there is one Alpha bitch in the pack and that's me. Donna ;o)

OH WOW!!! Their all absolutely beautiful. Do they get along well with each other when there's so many? You know, get jealous or fight over doggy toys and the like!

Hi again! I didn't know about the book. I'll get it. Doggone anyway. It is getting harder and harder on me to see these things. People on Facebook post pictures of people doing horrible things to animals for the fun of it! I get off my computer then because it takes a day or two to get that image out of my mind! I rescued a boxer one time that had been bred and bred and bred. She permanently looked like she had milk. The last time (when I rescued her) she had bred with a pit bull and they put her pups down because they thought they would be mean. People are so darn ignorant. My first boxer was one a neighbor owned. He was a huge brindle named Beau Brummel. They just let him run loose and he spent most of his time at our house because he was loved so much. He was even bitten by a skunk one night. They were moving to Italy and so we bought him from them. He was two years old then. They neglected to tell us he had Epilepsy! He had grand mal seizures and once over, he couldn't get up for an hour, even then he was disoriented. When he was 7, we had to put him down. The Primidone just couldn't do the job anymore. It never did completely stop the seizures. I missed work over that I was so devastated. There have been many since then and I took up the cause of the white boxer because they are so maligned and misunderstood. There is nothing wrong with them other than they are white and about 20 percent can be deaf. I had a deaf one named Cameo. I taught her sign language and she never had a problem understanding me unless her back was turned. She was a beautiful girl and very happy one too. I had one named Casper that we rescued from Louisiana, and one day he just laid down. I knew he was quit ill, so we rushed him to the vet some 30 miles away. He had Acute Hemolytic Anemia. I didn't know what that was then. This stupid vet that we had left one Veternarian's office to get away from ended up in the new office we were at. He said Casper would be okay. He died before we got him back to the vet. I despised that vet for a very long time, but finally for my own peace of mind, I forgave him. I know of course that no dog survives that. I didn't then. Oh, forgot to tell you I worked at a vet's office when I was 18 years old. Uh, that was a LONG time ago ;o) When we bought our farm in Virginia the lady we bought it from had an 11 year old female boxer named Dolly. She said she had rescued her, but she mistreated that dog. She lived on the property for awhile before she finally left and Dolly just loved to visit us. I asked if she would like to live with us and she let us have her. Dolly was mean and surly but when she realized what love was, that dog turned into an 11 year old puppy. And she loved toys! She lived to be 14 years old. One morning when we got up, she had just gone into a coma. We drove her to the vet and they put her down and I just came unglued. I loved that do SO MUCH! You know, lots of people turn their noses up at a senior dog, but they don't know what they are missing. She was just wonderful and I'd rescue a senior in a heartbeat again! Well if I were able to. I'm not in a position to anymore unfortunately. But that may change, I Hope. I just wish people were not cruel to animals. It breaks my heart. Someone put up a picture last night on Facebook of a bait dog and I just died a thousand deaths on the spot. I hate it so much I have to just get off my computer. I haven't been to my Facebook page all day because of that very thing. I wish they would stop it, I am all TOO aware of what these monsters do.

Hey Kathy, if you ever get the chance, read The Lost Dogs: Michael Vick's Dogs and Their Tale of Rescue and Redemption. Absolutely wonderful book. I know all about the cruelty of people. I was a vet tech for almost 20 years and what would come into the hospital was disgusting. I rescued 2 Staffi Bulls from 2 different hospitals I worked at. They were brother and sister, 3 years apart and from the same breeder!!! Both had been torn to pieces. The little girl had maggots in her wounds and a crushed back leg. She was 6 weeks old when he brought her in to be euthanized and had to stay in the hospital for over a month. We named them Duncan Hines and Betty Crocker!! Donna ;o)

OMG!! 14???? I don't know how in the world you do it!!! I really don't. Corky wears me out. And I know how expensive all that must be. My hat is off to you! You are dedicated to that breed, and all respect is due to you. I have owned boxers for 30 years now, and I see wonderful things in boxer rescue, but I also see a lot of sad and even horrible stories too. There are a lot of cruel people out there. I also love pit bulls. They are not dangerous. It is the people that abuse or train them to be dangerous that are at fault. Before I came back to Kansas my home state, I lived in Virginia and right now the road from Michael Vick! He is the football player that held dog fights with pit bulls on his property and went to prison for it. He should have stayed there! Thank God all those dogs were rescued and rehabilitated!! But on my Facebook page I see terrible things. There are a lot of rescue people there and it is a given that you will see that. I don't rescue anymore because of health problems, but I sure try and stay informed. God bless you! Kathy

Wow!! How many danes do you have altogether? I'm curious. How much does one eat each day. I know it must be much more than a boxer and he eats quite a bit, lol!

Love this picture!!! I am a boxer person, but I have always loved Great Danes, especially the Harlequins. If I had room I think I would have a Dane as well. ;o) My Corky says Hi!

I would love to throw a dozen balls for them for a while!