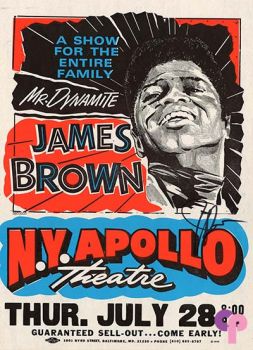 This poster was for a James Brown concert at the famed Apollo Theater in Harlem, NY , July 28, 1966.

The Apollo was built in 1914 as a burlesque theater. The district surrounding the building was opened up during the 1910s to African Americans making the Great Migration out of the South, and in the 1920s Harlem was transformed into a black residential and commercial area. In 1932, burlesque shows started being replaced by musical shows and the Wednesday Amateur Night became popular. Past winners were Ella Fitzgerald, Lena Horne, Marvin Gaye, and James Brown. Buddy Holly and the Crickets were one of the few white acts booked because the management thought, on record, they sounded black.

After his death in 2006, Apollo legend James Brown lay in state on the Apollo stage. Tens of thousands of people gathered to pay their respects. Or they misunderstood and thought they had tickets to see Chingy...

Its a good poster though, even if he wasn't a good man.

I laughed about the 'show for the entire family' bit with all that mayhem going on in his life, perhaps someone should have told the artist ! - thanks mpp , its always fun, my friend. (❀ᴗ❀)

Not everyone will like some of the musicians I have on posters - I don't like a lot of them - but I have a job to do, John, and dammit, I'm gonna do it!! Most I put up for the art work , some for the story, some for the music. Would we talking if I posted pretty flowers?

Sorry, but this one is not for me. Never a fan of James Brown on stage or off stage. Never liked his music and I can't honestly say I am a fan of animals.... black or white. Arrested multi times for spousal abuse and domestic violence, he fired members of his band for abusing alcohol and yet he went on to use PCP and coke, backup singers in his band fired because they wouldn't have sex with him, while performing in a Otis Redding concert he got into a shouting match with a fellow musician which led to seven people being shot, rape accusations... yeah, what's not to love? But I will admit that he was ahead of his time... If James Brown was alive today, he could have been a politician...