The Girl with a Book by William Merritt Chase. 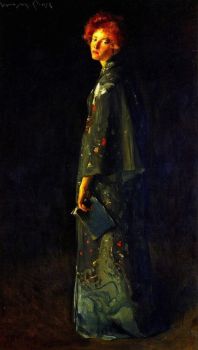 I have been watching a delicious slide show of William Merritt Chase - The complete works
www.william-merritt-chase.org/. It is almost 5:30 a.m. It had me mesmerized. I
started out by attempting to see if he was also a descendant of the New England Chases,
I am. However, it appears that his father was in Kentucky, moved to Indiana, and Wm.
went to NY to study, by that time, his parents (If they were still together) went to Missouri.
He left NY to go there and then later he went to California. I have as yet to find out if
his father David Hester Chase and I had mutual ancestors. I would have to find out
who David's parents were and go backwards in time. I thought I was on the right track
as one of the N. E. Chases, was also trying to tie him in with his ancestors, but another
Chase desc. of Wm Merritt Chase, said he wasn't descended from N. E. Chases, I am
not sure that person knows the early history.

You ask someone where were your ancestors from, they say 'Florida', well, I have to
chuckle as they were somewhere else prior to Florida. I'm not finished with him yet.

I do want to mention that I just solved this painting above and my goodness the
fiery lights of her hair and face as I was putting this puzzle together almost hurt my eyes.
I love this painting however, I wish he had taken a little more time with her eyes, though.
It appears he left them til the end, and dotted them with the heavy laden end of his
freshly dabbed paintbrush.

They painting below is referring to another painting by another artist, thanks Anno for
posting both of them. Bib

Coin de Canape by Francoise Amadieu ~ Just solved this most enjoyable
jigsaw anno, Thanks for posting. I had my reasons for not leaving a
comment on that puzzle. Have a good weekend. It is October, can you
believe?