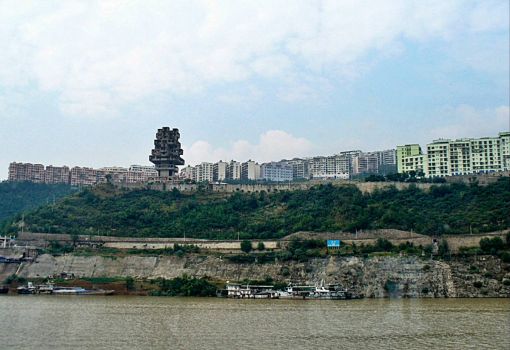 A strange structure, surrounded by a city, on the bank of the Yangtse River in China. If anyone can tell me what this structure is, or was, or was intended to be, I will be deeply grateful. :D
Created by blueeyedblond Published 20 July 2019

PS: I don't think our mutual friend bujal hasn't addressed the issue of mini skirts yet... or have I blinked and missed something?

Yes, but what was your search term? I noticed that there does not seem to be anything official about this "monument" in any of the promotional websites. So apparently the good burgers of that city/province don't think very much of it, or are perhaps even embarrassed by it - which lends support to patsquire's suggestion. The more I try to dismiss Pat's suggestion, the harder I find it to dismiss.

@boston_jack, once again you amaze me! HOW did you find this out?

@iceng yes! Definitely so! The city was built to house all those previously living in the river valley, whose homes were flooded by the rising waters backing up from the Three Gorges Dam.

@patsquire possible, but UNLIKELY. Chinese officials who are accused of corruption by those higher up have a habit of incurring very long gaol sentences... or just disappearing.

Strangely enough, when I saw this just now I *thought* I remembered that we had identified it back then. But we hadn't! Of course, there could be a mundane explanation, like some corrupt politician's pork barrel project to line his own pockets with kickbacks.

By Jack's post, it predates the apartments on the sky line.

Do you remember a conversation we had about the structure in this picture, about seven months ago? Well, now I've found the context picture (above) but I have no idea which city is in the background, or how far up the creek it is. Just thought you might be interested to see the city which surrounds the mystery structure. :D Beb.