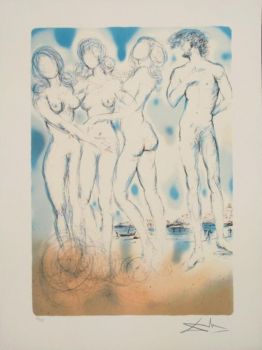 As a famous Spanish surrealist painter, Salvador Dalí had an artistic repertoire that included sculpture, painting, photography, multimedia works, and collaborations with other artists, most notably independent surrealist films. Dalí was born into his own quasi-surreal existence. His brother, also named Salvador, died as a toddler, nine months before Dalí's birth. His parents told him he was the reincarnation of his older brother, which he also came to believe.

It's hard enough for younger siblings to follow in the shadow of an elder sibling, but to be told that you are the older brother; I cannot begin to imagine how that belief would impact his life and twist his choices.

Dalí is best known for the striking and bizarre images in his surrealist work. Dalí was highly imaginative, and also enjoyed indulging in unusual and grandiose behavior. His eccentric manner and attention-grabbing public actions sometimes drew more attention than his artwork.

Dalí created his version of The Judgement of Paris as a simple black ink drawing with background shading added to give it an enhanced sense of depth. He produced this image as a lithograph.

A lithograph is created by the process of printing from a smooth flat plate on which the areas of the image to be printed are made to be receptive to holding ink, blank areas are not ink-receptive. Thus, multiple copies of the artwork can be created by pressing a sheet of paper against the plate.

- portions adapted from wikipedia.org and wikipaintings.org
Created by wermet Published 24. May 2013