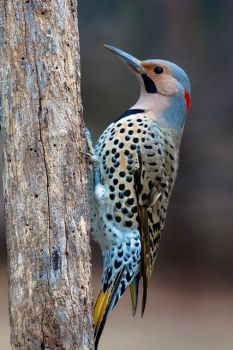 Created by reflexlady Published 3 days ago

humminbirdlvr and BirdNana, I have no interest in getting into an argument over a Flicker. However, I am interested in learning as well as educating others. I got into bird watching pretty seriously eight years ago, as well as bird photography. We regularly have Northern Flickers on our property. In the U. S. there are only two species of flickers. The Northern Flicker, which is found in 49 states and the very similar looking, Guilded Flicker, which is primarily found in Southern Arizona. A few birds, mostly hummingbirds, do have iridescent feathers that will look more colorful in the sun or at certain viewing angles. The flicker does not have iridescent feathers but there are some variations in color. Some are mostly brownish and others tend to be more toward the grayish shades. Parts of the bird's head and neck can be grayish or even a blue gray color. I have studied a great bird book that includes all birds in America. None have that surreal color of blue that is shown in this photo. The Mountain Bluebird comes somewhat close but is not the surreal color shown here. You can google "photos of flickers" online and you will see countless photos showing the various shades of the flickers. If you look long enough, you will see the exact photo used in this puzzle photo that someone placed on Pinterest. It is not hard to alter a bird photo and come up with a surreal color, whether by accident or on purpose. I develop my photos in a manner that shows the birds true colors. I am not totally opposed to someone tweaking the colors of a bird as long as they clearly disclose it as art and not try to pass it off as an actual bird. Terry

But that is the case when there are iridescent feathers which is not the case. I just found the cutest bird and not only had the wrong name but it has been altered.

Thank you humminbirdlvr, good to know. I'm glad you shared this info.

I personally don't believe the colors in this photo have been altered. We have Northern Flickers in my immediate neighborhood and they look EXACTLY the color of this one. Don't forget that the way light is shining on the bird affects the way it appears in the photo.

@reflexlady Some people take bird identification VERY seriously, disturbing the colors is NOT an appropriate thing to do. If I find an incorrect photo, I definitely would not post it.
Reflexlady have you heard Jigidi is considered a place to learn? We bird advocates care about people learning their birds properly.
Color enhancing should be prohibited, for many reasons and not only with birds.
And whoever called it an art, was mad.

jookeefe, this a male Northern Flicker of the yellow-shafted form. The is also a red-shafted form. Someone has obviously photo shopped the bird blue. The blue area is normally buff colored brown or even a grayish brown in color. Terry

This picture was found on the internet, I believe it is a Northern Flicker, a bit of yellow under tail feathers. Photo may have been enhanced a bit to make grey a bit more blue. Thanks for asking.
Have a good day :-)

Please tell me what species that is and where it is. Thank you.