hare, in the polder (haas) 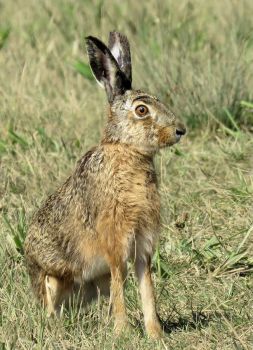 Created by schutkleur Published 1 April 2020
Why this advertisement?

schutkleur. I'd be shocked if you did have coyotes there....they are native to the New World especially the SW US and Mexico. They're like wild dogs/foxes. We also have eagles which behave very much as you described.

Yes Lia, I think foxes at least eat young ones, but we don't have foxes here in the West. Do you have foxes in the East??

Schutkleur: Don't foxes eat hares? Or at least the young ones?

I'm sorry Anne!! I'm really happy we dont have coyotes here. Rabbits and hares hardly are preyed on here. Only the large eagles take rabbits, hares and even geese. But we don't have that many around here.

I understand Ginni. I probably would do the same. I don't go often to places where I don't see wildlife most of the time. Missing ofcourse the moments when there IS wildlife to be seen there.
So we shouldn't be surprised not to see things when we don't go to the places where they can be seen (sometimes) :)))

Ah, schutkleur, I wish I saw hares, but we only have a very occasional rabbit...and usually young as our coyotes roam about after dark and they love rabbit.....well almost any small animal.

You're right that I don't go to the amphitheater part of the trail very often because I rarely see anything. If I wake up early, I do that loop because that's when the jackrabbits show up. So I've been there maybe 15 times, shortly after dawn, in the past year and not seen a single jackrabbit, never mind one posing for a photograph. The woman who sees them does that part of the trail just about every day, but she is only walking for the exercise. She doesn't even go the other way to see the ospreys with their chicks. I'd rather walk the west end, where I see something almost every day, no matter what time I go.

Please explain Judyly, our hares seldom get wings :))
Thank you, and you're very welcome :))

That's because he WAS Anne. I was standing still, trying to photograph a hovering kestrel high above me when I suddenly saw rapid movement in front of me. Two hares. So I kept quite still, hardly breathing, while they were running towards me. This one stopped some 10 yards away from me, and this indeed was the moment he saw me. But he didn't run immediately, maybe I didn't look all that scary? The other one even ran much closer to me. Puzzles will come up :))

Thanks Ginni. I love seeing hares, there are several of them in the polder, and sometimes I see one in the fields behind the park as well. But didn't you tell me you only see hares on a certain part of your trails? Maybe you didn't go there that often lately?

What no wings! He is a beautiful fellow. Worth a shot for sure. Thanks for sharing.

He looks a bit surprised to see you there! Quite a good photograph for showing his body off.

Lucky you, to see this lovely fellow! I think it has been a year since I saw one of our jackrabbits.