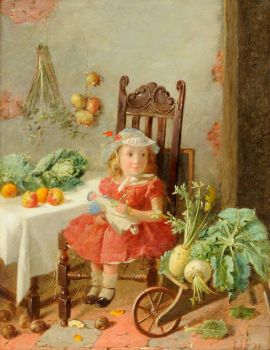 Would love to know the story behind this painting.
The little girl apparently doesn't live in this house.
She is all dressed up wearing her hat and Mary Jane's.

My guess is that she was taken along by her
caretaker, to buy produce from and individual
and in order to keep her out of trouble, she was
told to sit in the chair and play with her dolly,
until time to leave. She appears to waiting
patiently and looking in the direction of where
the caretaker 'disappeared' to.
Doll

Charles Hunt was a painter of contemporary genre, often humorous, as well as historical subjects; but he is usually associated with charming interior scenes with mischievous little children. Very occasionally he turned his hand to important pieces, which are ingeniously composed, highly finished and especially natural. His name is synonymous with the highest excellence in animal and figure paintings.

He is singled out by Reynolds, who illustrated in the Museum, as being one of those “artists who painted modern life in the 1850’s and attained a standard of achievement which ensures their continuing interest”.