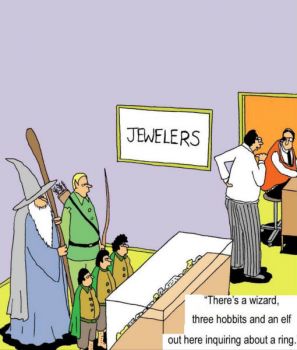 He also had a bit part in an episode of This Life, which starred Jack Davenport.

manicpuzzler, did you make hobbit ears there? That's excellent! And thank you for the Martin Freeman bio! He was born to play Bilbo Baggins!

As I was added to this list by the well intentioned fans , friends, neighbors, complete strangers, foes, aliens, and endangered species, I will gladly step down, after enjoying my time in the spotlight (as well deserved as it was), and allow Martin to go to his proper spot.

I picked the wrong letter - again.

You simply need to add some LSD to your tea.

I have seen all the Lord of the Rings films, but have not watched the Hobbit ones yet. I will get round to it. I have not read the books as I find it hard to imagine fantastical stuff, it needs to be shown to me.

You MUST read the books! They're fabulous... much better than the movies, which were really good.

Have neither read the books nor seen the movies, I have no idea. ☺ Thanks, Bonnie.

Love this so much! Still watching all these movies - they keep me sane. I know the answer and all the other actor's roles, too! Good morning!

I humbly, of course, accept the honor of being mentioned amongst this list of cinematic titans.

I will, also, very humbly, vacate my spot for the actor that DID appear in the film (my scenes, as it were, remain unfinished to this day. In my (humble) opinion, my scenes would have stolen the focus of the main story of the picture.

Superior acting ability, and complete emergence in ones role, can be difficult, but I bear this burden for all of you.

I thought I knew.

I know this for absolutely 100% sure.

LOL - Definitely NOT C, they would still be filming.

and then they marry us :oD since I have been a fan of J.R.R. Tolkien for over 4 decades, & have all 6 movies ... I do know the answer to this

Women sometimes make fools of men, but most guys are the do-it-yourself type.