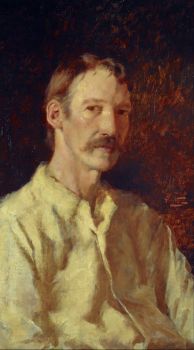 Robert Louis Stevenson (1850–1894) was a Scottish novelist and travel writer, most noted for Treasure Island, Kidnapped, Strange Case of Dr Jekyll and Mr Hyde, and A Child's Garden of Verses. He suffered from a "weak chest" all his life and died in Samoa at the age of 44.
Created by Bluestockings Published 26. Apr 2019

I guess we'd have to look further than Wikipedia for the answer. Wikipedia says, "Contemporaneous views were that he had tuberculosis, but more recent views are that it was bronchiectasis or even sarcoidosis"; elsewhere it says, "On 3 December 1894, Stevenson was talking to his wife and straining to open a bottle of wine when he suddenly . . . collapsed. He died within a few hours, probably of a cerebral haemorrhage." Since he died in the tropics, they probably buried him quickly, and there may not have been a doctor present, so I don't know how anyone today could be sure of the cause of death.