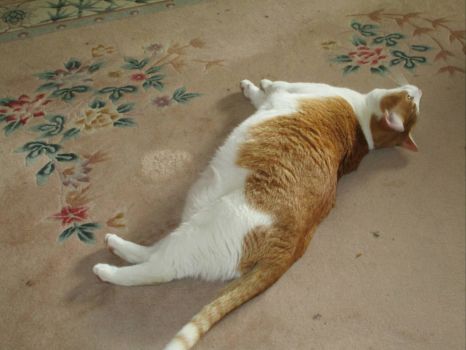 On one of his ventures into the house he discovered the softness of this rug!
Created by alcina Published 19. Jun 2019

Val he got quite overweight over the winter. He seems to be slimming down a bit now. If he was actually my cat I would put him on a diet!

Carol he looks very comfortable he seems quite a large cat☺

He is clever Impie and he only comes in when invited--unlike Dorus. I don't mind visiting cats but I know some people don't like it. I hope Dorus has identification tags. I agree that traffic is worrisome. I even worry about Kitty Kat crossing our very quiet street although he seems to be smart about cars. (And you can call me alcina or Carol--either is fine with me.)

My best friend has a new kitty boy "Dorus" since August last year. After keeping him indoors for some 5 weeks, she let him roam free in the neighbourhood! She does keep him inside at night!!!! She feels she needs to give him his freedom. He goes out the back door into her garden and comes in through the cat flap in her kitchen door at the front! I'm scared for him, because three very busy traffic roads surround her street and Dorus might go further and further. Anyway....like I said she lets him out because he sits at the door meowing but do you know what he did for months? as soon as he was outside he jumped on the wall (between her garden and next door) then stepped on the window sill of the neighbour upstairs and from their on her balcony and through the open door he entered her home and slept on her bed! She got quite a scare every time she saw him lying on her bed!!! (he does this also at other neighbours only he there climbs on their balcony via a tree branch! Needless to say the neighbours aren't amused to put it mildly!!! I suggested she'd put a planter on the wall, which she did....since then he can't go to her upstairs neighbour anymore!
Yesterday she was on the phone ....that afternoon she heard Dorus crying loudly behind the front door of her next door neighbour! Apparently the man was gone but had forgotten to close the back door, so Dorus went into his home and wanted out the front door!!!..As you know I really love and adore kitties, but I'm glad I'm not my best friend's neighbour.....Dorus trespassing would be a threat to our friendship!!!!

He actually hasn't wanted to come in the house for awhile now but when he visits he stays for several hours--often napping.

He's making himself more and more at home over there. ☺ Thanks, Carol. Fun to see him again and have you posting.