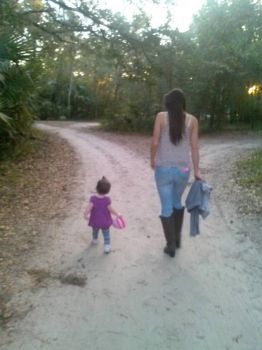 @brie I love this picture. My Granddaughter and my namesake, Juliana coming to a fork in the road.
@FosterMomMaria We have lots of dogs, most rescues. The latest is Nyla. The trolls pop up without warning. Brie had a terrible time with one. They don't need a reason to be offensive. Sadly, I think Brie is right. Not much will happen. But we, The Good Guys, outnumber them and we're to going anywhere! Keep posting, friends!

Hi Maria and Julie. I can not believe these are still lurking!
You wonder what they are on - nasty.
Well done for reporting him but if the past history of reporting is to go by, nothing will happen.
Julie - when I saw this puzzle it brought a smile to my face; it is just innocence personified.

Julie, I saw the crazy comments by https://www.jigidi.com/user/bigswinger on my puzzle and I reported him.

@Hall_Monitor I have no idea who you are and could care less.

yes, let's condemn them to the detritus of the pond where they belong and celebrate the good of everyone here!

I have more to say, but will le it go for now. MERRY CHRISTMAS Doll & Brie.

Hello Brie, I clicked on their 'pictures' below and they haven't been on
jigidi for a long time, hope they stay gone. I wasn't acquainted with
their names until I came across this puzzle. I have had my share of
them both male and female. Sue Marie, janedoe, Cyprian, hall_monitor
There are other guys on here that are so perverted, one told a friend
of mine that she should ball up her fist and f---k herself, she is in a
wheelchair, quite handicapped and this hurt her to the core. I always
send off a note to jigidi Stephan when these things occur, nothing is
done about it. Both of you take care. Doll

Hi Julie - I saw this puzzle pop up in my list of comments! That was a bad time but we came through. I think they went once the stars were finished. I read a lovely comment the other day that said "If he had a brain cell he would be lop-sided. That summed them up!
It always made me chuckle if I thought of them with their well-hard friends drinking in a pub somewhere, discussing who they were trolling and one of them came up with 'Jigsaw puzzles' LOL!! Real toughnuts.
I'm glad they have gone. Hopefully, they aren't lurking out there just waiting but they are probably trolling knitting pattern sites by now.
I loved this picture. I have a similar one of my niece and great niece; it just says happiness.
May I wish you and Doll, a very happy Christmas :o)))

Hello julie88, Brie1648, and Dilubreuer. I was looking for one of julie's puzzles
to post a season greeting on and lo and behold I came across these old codger
perverts back in 2015, having their hate filled daily jigidi troll, this time on julie's
comments.

julie, I am so proud of you in standing up for what you know is right. These guys
have their brains in between their legs, and that is all they have known since puberty.
There is another guy on here who I have thought more than once of reporting him
to the FBI, he is one sick dude, when it comes to little girls and young women. His
letters in his name are d--d p---y, he has what is supposedly his photo on his profile.

I haven't run into the jerks below, maybe they 'kicked the bucket' or went somewhere
else. Sorry my timing was off on leaving this message right at Christmas, I just had
to speak out. You all have a wonderful Christmas and a safe New Year. Doll

Spot on Julie - we can sleep with a clear conscience and glad we have the good people here:o)

I don't get it. It IS for fun. What do the trolls get out of it ? But they have to live with themselves and Thank God we don't.

That is so sad - for heaven's sake, it's a puzzle game - why are some people so evil

Brie, you are doing great...jlou's disillusionment made her finally give up, i missed her puzzles. She too was treated unfairly by some puzzlers.

A few months ago was my first 'trolling' - and it really upset me. It started because I have more than one star and would use them to make sure we would get 10 stars on certain puzzles. Another lady, who wasn't very fast as she has hand problems, would call on me to solve for her. Here's one quote from a (rather choice) name called Tossbag:
"And how many tries and different profiles did it take you, brie. You never know who is watching, tossbag."

I was called a cheat, immoral : Peacockchimes: "You'll just buy them off like you always do. Nice morals you're teaching kids. If it doesn't go your way, just pay them off. Nice job."

It was vile; it still is but now I really couldn't care less. There's one who goes by NoCheese, OldCheese etc etc. - all digs at the cheese names I used.

The sad thing is it looks like they have won because Stefan and Marcus are not having stars anymore.

BUT - we are better than them. They obviously get their thrills from being trolls - we have much more going for us - friendship, mutual respect and honesty :o)

True Brie. They only removed one really nasty remark from someone named 'red blocks', one of the non-publishing anonymous 'trolls'. Only people like you and other supporters of sexyshoes keep me coming back. TYVM.

The amazing thing is if you report 'trolling' and nasty, personal comments, you get nothing...

You're right Brie, I like to think the good outweighs the bad too. Thanks again. I'm so happy s/s is staying. I saw her Offensive puzzles. What a joke!

Anytime you are in need of support we'll be here as is all too clear from Sexyshoes experience this week. I notice there was nothing from pond scum in all the comments that were made - it's great to know that the good people win in the end.

Thank you very much Brie

Julie - that is a beautiful picture and there are so many lovely comments posted here. Let the pond-scum sink back into the slime from whence they came. I - along with several others - have been at the receiving end of the jigsaw puzzle trolls - rather sad that they lurk doing... jigsaws - treat them with derison.

When you point the finger, three are pointing back at you.

I may be stupid as you put it but I never said you were confused, I don't think you are at all I just think that like most people who try to get out of being "called" on their attitude they call people names etc to win their argument you are your own worst enemy in this regard

You are dumber then I thought, first you lie and now you deny your own comments

Don't have a clue what this guy means. maybe he's confused.

I have just spent some time reading comments posted by people on a particular contributors pages and I noticed your comments in particular. I find you like most so called moral people are very hypercritical you gush over topless and naked male images to the extent that you would like to introduce one of them to your granddaughter yet a naked or topless female is crude vulgar or should be banned and the person who submitted it is disgusting .

At least you are honest o410edog and don't hide behind anonymity as many others do. You are correct, my opinions ARE my own. No one is forced to read them. I like your dog. I don't know what 'belt up' means. Seat belts perhaps?

julie88 yes you are entitled to yor opinions but keep them to yourself and stop trying to ram them down everyones throat. The country you live in would be far better if you stoped preaching the so called m,oral high ground and started behaving in a much more concilleratory manner. In the mean time belt up

Right back 'atcha, redblocks. I assume you are referring to my comments on the T&a puzzles. I am entitled to my opinions. I don't use obscenities or tell lies, as you obviously do!

WOW !!! that women as one nice rear end would love to see more

Well said julie...was touched, i see you to be a very sensible person! I have a granddaughter as old as your great grand, your feelings is similar to mine with daughter...thanks for touching my emotions, sometimes it is just hardening...lunie

What a beautiful picture and story. The way you express yourself, sure wish we were neighbors. You express such love. Also want to thank you for the kind comments about my husband and me. Blessings, Mary

Thank you and best regards from Germany :-)

Coming to another of many forks in their way. Good message.

My Granddaughter and Great granddaughter just starting on a long and I hope happy life. They are my heart.