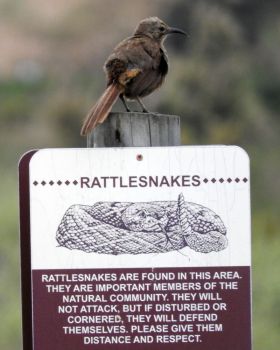 Created by Ginni2 Published 25 June 2019
Why this advertisement?

There was a rattler two weeks ago that just hung out in the middle of the trail and wouldn't leave. Usually they are just crossing the trail. I didn't see it, but two people texted me. One friend saw it when she headed out and it was still there 45 minutes later. I texted the ranger, but it was before she got on-site and I'm not sure she would have done anything anyway -- snakes belong in the reserve, although I'd rather not see them. A couple stopped to talk to me about the birds I was photographing last week and they mentioned the snake too. The woman had a photo on her phone. Someone had put some broken branches around it, I guess to make it more noticeable, and it was in the branches with 1/3 of its body up, looking around. It was a big one!

Reminds me of the old Jethro Tull song ".... he who made kittens put snakes in the grass..." Glad we don't have rattlers in my area. Dogs can't read the signs :-)