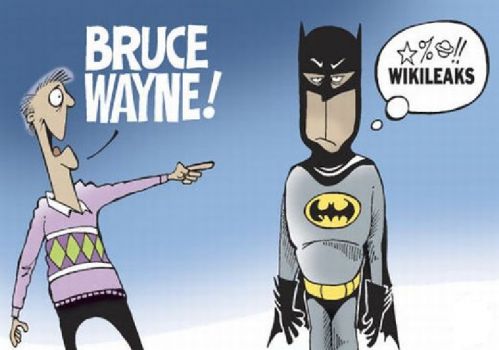 
Bonnie, just between you and me, I think nanab is buttering you up for something. I have not finished my not a cooking show, so it is none of MY recipes. Tread carefully.

You actually are doing something Bonnie, you've researched and shared the information you have found, you're a steadfast advocate for the protection of wildlife and their habitat, and you practice conservation in your activities of daily living. That's more than many people are doing.

I am off to Vietnam in 29 days. A change of scenery should do the trick :))

AHA - I KNEW something wasn't quite right, I recommend a spa day.
Leave your worries and puzzles and take a break.

I am very tired, my insomnia is really getting me down. I am completely exhausted all the time. I worry too much about things that I can't do anything about.
Brexit
Environmental concerns
Australian Fires
etc etc

Just a feeling, glad all is well.

Fine BB, why do you ask?

Bonnie, is everything all right?

Julian Paul Assange (né Hawkins; 3 July 1971) is an Australian editor, publisher, and activist who founded WikiLeaks in 2006. WikiLeaks came to international attention in 2010 when it published a series of leaks provided by U.S. Army intelligence analyst Chelsea Manning. These leaks included the Collateral Murder video (April 2010), the Afghanistan war logs (July 2010), the Iraq war logs (October 2010), and CableGate (November 2010). After the 2010 leaks, the United States government launched a criminal investigation into WikiLeaks.
In November 2010, Sweden issued an international arrest warrant for Assange, after questioning him months earlier about allegations of sexual assault. Assange denied the allegations, and said they were just a pretext for him to be extradited from Sweden to the United States because of his role in publishing secret American documents. Assange surrendered to UK police on 7 December 2010 but was released on bail within ten days. Having been unsuccessful in his challenge to the extradition proceedings, he breached his £340,000 bail in June 2012 to seek asylum from Ecuador. In August 2012, Assange was granted asylum by Ecuador due to fears of political persecution and possible extradition to the United States. In January 2018, he was granted Ecuadorian citizenship; however it was suspended in April 2019. Assange remained in the Embassy of Ecuador in London for almost seven years.
During the 2016 US Democratic Party presidential primaries, WikiLeaks hosted emails sent or received by candidate Hillary Clinton from her private email server when she was Secretary of State. The U.S. Intelligence Community, as well as a Special Counsel investigation, concluded that the Russian government carried out a hacking campaign as part of broader efforts of interference in the 2016 United States elections. In 2018, twelve Russian intelligence officers, mostly affiliated with the GRU, were indicted on criminal charges by Special Counsel Robert Mueller; the indictment charged the Russians with carrying out the computer hacking and working with WikiLeaks and other organisations to spread the stolen documents. Assange consistently denied any connection to or co-operation with Russia in relation to the leaks, and accused the Clinton campaign of stoking "a neo-McCarthy hysteria".
On 11 April 2019, Assange's asylum was withdrawn following a series of disputes with the Ecuadorian authorities. The police were invited into the embassy, and he was arrested. Later that day he was found guilty of breaching the Bail Act and on 1 May 2019 he was sentenced to 50 weeks in prison in the United Kingdom. On the same day, the United States government unsealed an indictment against Assange for alleged computer intrusion, related to the leaks provided by Chelsea Manning. On 23 May 2019, the United States government further charged Assange with violating the Espionage Act of 1917. Editors from newspapers including The Washington Post and The New York Times criticised the government's decision to charge Assange under the Espionage Act. As a result of the revocation of his asylum, and at the request of his alleged rape victim's lawyer, Swedish prosecutors reopened their investigation in May 2019. In November 2019, they dropped the investigation, citing weakened evidence due to the time lapse after the alleged offence. Assange is incarcerated in HM Prison Belmarsh, reportedly in ill health.

I don't know for sure, but have a guess.

Chewbacca started his own website releasing peoples secrets. he calls it wookieleaks

Knowing the first and last letter... come on guys, it can't be hard any more.
And the second letter is: u, l, r or m.
So now you must have found out what it is.


Isn't it nice that one of the answers last letters are named after me!!

I am amazed that he did not name his site Pandora’s Box; for Wikileaks sounds like what happens to all the old weak bladders of the world, 'We-leak' you can depend on us.

I'll have to guess.

Yawn. So simple, a hippo could get this.

I DO see that Merica is misspelled.

ah, don't worry, hoff is researching australia as we speak. :)))

after all, it starts and ends with an A

I found a rock yesterday which measured 1760 yards in length. Must be some kind of milestone.