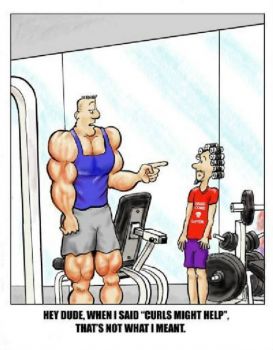 He may change his name when he gets older Fay :))

As a kid I remember ads for body building using his name. Got this one. Thanks, Bonnie.

Of course it is. Yay for Fay. My sister has a little nephew (???times removed) called Atlas, that will take some living up to!!

sharks were seen hauling ass with panic in their eyes.

I did assume that was what your profile name meant :))

The size of your surfboard would have made you 'shark safe' I would have thought :))

@manicpuzzler leon is my name
sr means senior because there is a junior
43 is my year of birth de facto nineteenfortythree
my avatar is me with my home build windsurf board, it is so big my friends called it the
nimitz. at the time the foto was taken my length was six feet six my weight was 310 pounds and that's all I'm gonna tell you.

Points awarded to Mr. Leo Sr43. He was quoted as saying after his big win "“I can go right, I can go left, I’m amphibious.”

Charles Atlas (born Angelo Siciliano; October 30, 1893 – December 24, 1972) was an Italian-American bodybuilder best remembered as the developer of a bodybuilding method and its associated exercise program which spawned a landmark advertising campaign featuring his name and likeness; it has been described as one of the longest-lasting and most memorable ad campaigns of all time.
Atlas trained himself to develop his body from that of a "scrawny weakling", eventually becoming the most popular bodybuilder of his day. He took the name "Charles Atlas" after a friend told him that he resembled the statue of Atlas on top of a hotel in Coney Island and legally changed his name in 1922. He marketed his first bodybuilding course with health and fitness writer Dr. Frederick Tilney in November 1922. The duo ran the company out of Tilney's home for the first six months. In 1929, Tilney sold his half of the business to advertising man Charles P. Roman and moved to Florida. Charles Atlas Ltd. was founded in 1929 and, as of 2019, continues to market a fitness program for the "97-pound weakling" (44 kg). The company is now owned by Jeffrey C. Hogue.
Angelo, Angelino, as he was also called, moved to Brooklyn, New York, in 1903 and eventually became a leather worker. He tried many forms of exercise initially, using weights, pulley-style resistance, and gymnastic-style calisthenics. Atlas claimed that they did not build his body. He was inspired by other fitness and health advocates who preceded him, including world-renowned strongman Eugen Sandow and Bernarr MacFadden (a major proponent of "Physical Culture"). He was too poor to join the local YMCA, so he watched how exercises were performed, then performed them at home. He attended the strongman shows at Coney Island, and would question the strongmen about their diets and exercise regimens after the show. He would read Physical Culture magazine for further information on health, strength, and physical development, and finally developed his own system of exercises which was later called 'Dynamic Tension', a phrase coined by Charles Roman.
A bully kicked sand into Siciliano's face at a beach when he was a youth, according to the story that he always told. At this time in his life, also according to the story, he weighed only 97 pounds (44 kg). According to several stories and claims, he was at the zoo watching a lion stretch when he thought to himself, "Does this old gentleman have any barbells, any exercisers? ... And it came over me. ... He's been pitting one muscle against another!" None of the exercises in the Dynamic Tension course could be attributed to how lions use their bodies. Other exercise courses of the time contained exercises similar to Atlas's course, particularly those marketed by Bernarr McFadden and Earle E. Liederman.
Bernarr MacFadden, publisher of the magazine Physical Culture, dubbed Siciliano "America's Most Handsome Man" in 1921, and "Americas Most Perfectly Developed Man" in a 1922 contest held in Madison Square Garden He soon took the role of strongman in the Coney Island Circus Side Show. Nowhere did Atlas win a title proclaiming him to be the world's most perfectly developed man.
In 1922, 30-year-old Siciliano officially changed his name to Charles Atlas, as it sounded much more American. He met Dr. Frederick Tilney, a British homeopathic physician and course writer who was employed as publisher Bernarr MacFadden's "ideas man". Atlas and Tilney met through MacFadden, who was using Atlas as a model for a short movie entitled "The Road to Health". Atlas wrote a fitness course and then asked Tilney to edit it. Tilney agreed and Atlas went into business in 1922.
Atlas' "Dynamic Tension" program consists of twelve lessons and one final perpetual lesson. Each lesson is supplemented with photos of Atlas demonstrating the exercises. Atlas' lesson booklets added commentary that referred to the readers as his friends and gave them an open invitation to write him letters to update him on their progress and stories. Among the people who took Atlas' course were Max Baer, heavyweight boxing champion from 1934 to 1935; Rocky Marciano, heavyweight boxing champion from 1952 to 1956; Joe Louis, heavyweight boxing champion from 1937 to 1949; British heavyweight weightlifting champion and Darth Vader actor David Prowse; and Allan Wells, the 1980 Moscow Olympic Games 100 meter champion.
Besides photographs, Atlas posed for many statues throughout his life. These included Alexander Stirling Calder's Washington at Peace (1917–18) on the Washington Square Arch, Manhattan; Pietro Montana's Dawn of Glory (1924) in Highland Park, Brooklyn (sometimes misreported as Prospect Park); and James Earle Frazer's Alexander Hamilton (1923) at the U.S. Treasury Building in Washington, D.C.
Atlas began to experience chest pains after exercising during his final years, resulting in his hospitalisation in December 1972. He died from a heart attack in the hospital on December 24, 1972 in Long Beach, New York at age 80. He left behind a son, Charles Jr., and a daughter, Diana. His wife, Margaret, had died seven years before. Nunziato Siciliano, Atlas' father, who had returned to Italy shortly after arriving in the US in 1903, lived into his 90s. Atlas' son, Charles Jr., died in August 2008 at the age of 89.

Hoff is between branches I think.

Bodybuilders are like people with anorexia. They have a delusional vision of their own bodies and have to change them. They don't realize that ''normal'' is healthier. As the saying goes: Everything in moderation.

I agree, Ardy. I pick the same one.

One name stands out so I'll choose it. Your cartoon did make me laugh. Thanks, Bonnie.

Here lies Mrs. Morgan. She lived with her husband for 50 years and died confidently in the hope of a better life.

I have only heard on one of these guys. I don't understand why they (bodybuilders) want to look so grotesque!

I don't care for body builders....

Take my advice — I'm not using it.