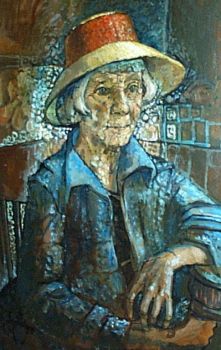 Bio
Susan Beatrice Pearse (19 January 1878 – 1980) was a British illustrator of children's books best known for the Ameliaranne series of books.

She was born in Kennington in South London and educated at King Edward's School, Southwark.
She married Walter E Webster in Fulham towards the end of 1919, but continued to use her maiden name professionally. To her friends, she was known as 'Trissy' Webster. She is best known for her work on the Ameliaranne series of children's books. She also created drawings for greeting cards and often included pictures of dolls in her work. Susan B Pearce Webster lived her later years in the village of Blewbury, Berkshire, about 50 miles west of London, a village popular with authors and artists including John Revel, Kenneth Grahame and Marguerite Steen. She died in 1980 in Fulham, London at the age of 102.

Ameliaranne books (Would love to know if these
books are familiar to you, I am not acquainted
with them, the illustrations look familiar. Doll)

This series of 20 children's books was published between 1920 and 1950 by George G. Harrap of London. It was unusual as it involved eight different individual authors working with a single illustrator. Ameliaranne Stiggins was the oldest daughter of a poor washerwoman, Mrs Stiggins who also had five other children. There is no mention in the Ameliaranne cannon of a "Mr Stiggins". The stories are simple tales of a young girl faced with a new or difficult situation that requires her to use some imagination and ingenuity to resolve. The books are remarkably consistent, given their different (all female) authors, but their real strength and the source of their lasting appeal are the charming illustrations by Susan B Pearce. The text is quite limited in the books and the narrative is largely carried by the very effective and expressive illustrations.

The following Ameliaranne books were all published by George G. Harrap, London. Most were reprinted, some with alternative titles.

Other Illustrated books
The Magic Fishbone: A Holiday Romance From the Pen of Miss Alice Rainbird, Aged 7, by Charles Dickens
The Trial of William Tinkling, Written by Himself at the Age of 8 Years, by Charles Dickens
The Twins and Tabiffa: Constance Heward
The Ice Maiden, by Hans Christian Andersen. (Stories for the children.) With eight pictures in colour by SB Pearse c.1905 edition, Ward, Lock & Co, London; the Platt & Peck Co, New York. Printer: Butler & Tanner, the Selwood Printing Works, Frome & London
Wikipedia
Created by Dollcollector Published 15 May 2019

You certainly do your research. Many thanks! I know here family like the back of my hand and they are Lso mine. I wanted to know more about her as N artist and writer and you made her profile Much better! I will include it in her wikitree profile when I get my pic out of the hospital. Thank you again! Barb

This person did not have spell check.

Found this on Genealogy.com (most of the info for this tree was found Mormon Church Records

Blanche McManus (daughter of Thomas Hugh McManus and Johanna Wild Tritt) was born February 02, 1864 in Talladega Plan., McManus, LA, and died June 20, 1935 in New Orleans, LA.She married Francis Miltoun Mansfield on October 12, 1898.
Includes NotesNotes for Blanche McManus:
Married Frances Mansfield
Lived in Hampton Hall - Woodville LA
Sources: Who's Who in America 1922-23 pg 2132
News Article - Woodville Republican 1915
Will and papers of succession of Johanna Tritt McManus
Telephone Conversation with Evelyn Lambert - Sept 1978
Samuel McManus and Sarah Griffin and their Descendants in East Feliciana
by Ruth Macmurco
Blanche McManus (fourth child of Thomas Hugh McManus and Joanna Tritt) was
christened at St. Alban's Episcopal Church in Jackson, on September 15, 1864,
and spent her early childhood years in East Feliciana. She attended boarding
school in New Orleans and lived for a while in woodville, Mississippi. She
later studied art in Ney York, Boston, and Paris. On October 12, 1898, in New
York City, she married Francis Miltoun Mansfield (b.February 14, 1871, Lynn,
Massachusetts). Much of her adult life she and her husband lived abroad.
Slthough she and her husband collaborated on a number of books, shewas quite
successful in her own right. She wote and illustrated thirteen books, between
1905 and 1911. She illustarated twenty-five books by other suthors. Among these
were Alice's Adventures in Wonderland & Through the Looking Glass and The
Rabaiyat of Omar Khayyam as well as a number of travel books written by her
hysband under the pen name Francis Miltoun. In 1902 Blanche McManus was
commissioned to design and decorate the prayer book carried by King Edward VII
at his coronation.
Blanche McManus is included in many reference books listing artist and
authors. Among these are: Who's Who in America (v. 1 through v. 18 1899/1900
--1934/35); American Authors and Books, 1640-1940; Dictionary of American
Painters, Sculptors, and Engravers; Mallett's Index of Artists; and A
Biographical Index of American Artists.
More About Blanche McManus:
Burial: Hampton Hall, Woodville, MS.
More About Blanche McManus and Francis Miltoun Mansfield:
Marriage: October 12, 1898

Found a little more than I thought I would, better get to bed, I had hoped to find
some tie into my family, there still could be. Nighty nite! Doll

Had never heard of her, she may have been a private person, tried to find out more
but this is all I could find.........,

Blanche McManus (1869–1935) was an American writer and artist. She and her husband,
Milburg Francisco Mansfield wrote a series of illustrated travel books, many of which contained automobiles which were new at the time.

what can you tell me, would be interested. I did find this under a painting that
she had done......

I just found the below.....
Artwork of Blanche McManus

Little is known regarding this artist, except that she was born in East Feliciania Parish, Louisiana, in 1870, studied in London and Paris, and travelled with writer/husband, Francis Miltoun (Mansfield), throughout Europe and North Africa around the turn of the century. Their collaboration led to a series of travel books, fully illustrated by McManus. On these next few web pages are part of the many illustrations she executed for these books, many as watercolors, while the majority were pen-and-ink and charcoal sketches. Her work is little known, but it exemplifies the best tradition of Arts and Crafts artwork of the time.

Link to her paintings

She must have been pretty well known, what a delightful looking woman and what a library! Have you ever heard of a children's write named Blanche McManus late 1800s early 1900 I think? Thanks again, Dollfriend!