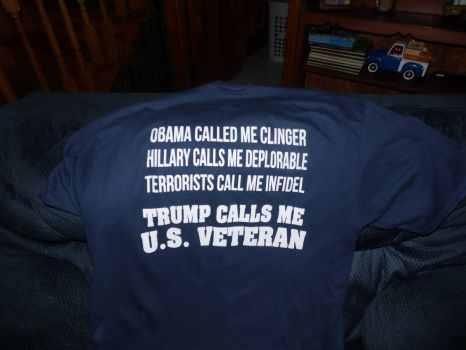 Just saw this puzzle. Great shirt. Great President. Thank you for your service.

Sad, but President Trump is a L I A R. He calls you a veteran. (l say thank you for your service, most sincerely.) How has your lot improved since his election?
He will say anything that he thinks you, his supporter, want to hear. He will act only in his own personal best interest-
The "liberal media is lying?" Who is telling the truth? Propaganda from Russia? Of course that's a lie...

Agree with Ghost. I was appalled at how Trump spoke of John McCain. I am not a McCain political supporter, but I don't see how his service to his country or his patriotism can be questioned.

I don't get it . . . but then I stopped listening to anything related to politics when I got tired of the childish, back-stabbing actions while they all play the old game, King of the Mountain. (:

Unless you're captured, then he calls you a loser. He doesn't like losers. ;-I