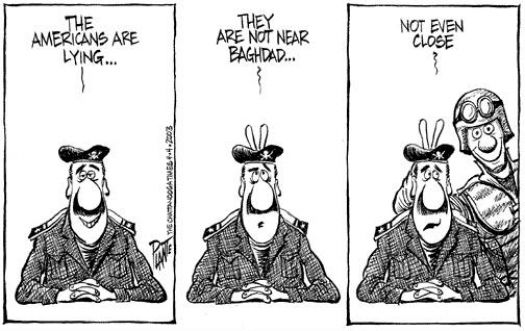 The city of Baghdad lies along the banks of which river?
Created by Stillmanic Published 17. Apr 2019

Thank you that was interesting :)) I'm surprised Wiki didn't mention that, but I only cut and paste the top section of the wiki text. It gets too long otherwise.

Interesting Manic. But your text did not mention what Baghdad means - apparently it is of pre-islamic derivation (Indo-European) and means "gift of God" - though which God I could not say...

Absolutely, come on over. When it floods, no one will know the difference!

I had guessed Euphrates. I'm on a non-roll.

Baghdad is the capital of Iraq. The population of Baghdad, as of 2016, is approximately 8,765,000, making it the largest city in Iraq, the second largest city in the Arab world (after Cairo, Egypt), and the second largest city in Western Asia (after Tehran, Iran).
Located along the Tigris River, the city was founded in the 8th century and became the capital of the Abbasid Caliphate. Within a short time of its inception, Baghdad evolved into a significant cultural, commercial, and intellectual centre for the Islamic world. This, in addition to housing several key academic institutions (e.g., House of Wisdom), as well as hosting multiethnic and multireligious environment, garnered the city a worldwide reputation as the "Centre of Learning".
Baghdad was the largest city of the Middle Ages for much of the Abbasid era, peaking at a population of more than a million. The city was largely destroyed at the hands of the Mongol Empire in 1258, resulting in a decline that would linger through many centuries due to frequent plagues and multiple successive empires. With the recognition of Iraq as an independent state (formerly the British Mandate of Mesopotamia) in 1938, Baghdad gradually regained some of its former prominence as a significant centre of Arab culture.
In contemporary times, the city has often faced severe infrastructural damage, most recently due to the 2003 invasion of Iraq, and the subsequent Iraq War that lasted until December 2011. In recent years, the city has been frequently subjected to insurgency attacks. The war had resulted in a substantial loss of cultural heritage and historical artefacts as well. As of 2018, Baghdad was listed as one of the least hospitable places in the world to live, ranked by Mercer as the worst of 231 major cities as measured by quality-of-life.

I wonder if they will ever recreate those gardens :)

The Hanging Gardens of Babylon, one of the original Seven Wonders of the World, was also located on the same river. Wish I could remember the name! [ :-))) ] ♥♥♥

Joan Rivers has passed away, but her witty one-liners will live on for many years to come.

“I’ve had so much plastic surgery, when I die, they will donate my body to Tupperware.”
“My breasts are so low, now I can have a mammogram and a pedicure at the same time.”
“I knew I was an unwanted baby when I saw that my bath toys were a toaster and a radio.”
“I was dating a transvestite, and my mother said, ‘Marry him, you’ll double your wardrobe.’’