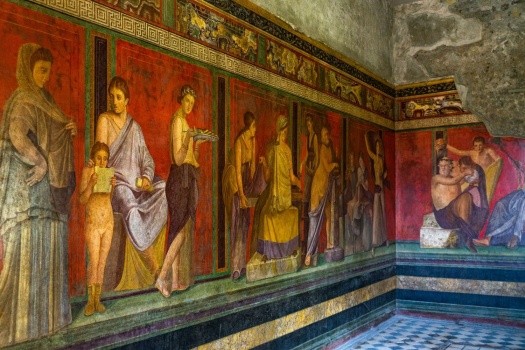 In Today's Daily Jigsaw Puzzle we're in the ancient city of Pompeii, Italy.

In 79 AD, Mount Vesuvius erupted and tragically buried several cities in the surrounding area – amongst these was Pompeii. Pompeii was a wealthy city with around 11,000 people living there at the time of the eruption.

Centuries later, Pompeii was excavated and found primarily preserved under the ashes. The beautiful frescoes in Today's Daily Jigsaw Puzzle are from "Villa Dei Misteri."

Villa Dei Misteri is a fine and large villa with rooms for dining and entertaining and additional functional spaces. It is located on Pompeii's outskirts, and the estate sustained only minor damage and was mostly preserved. It is known for these beautiful frescos you see in Today's Daily Puzzle - they presumably portray the initiation of a young woman into a Greco-Roman mystery cult.

If this has gotten you interested in the history of Pompeii and Villa Dei Misteri, you can read much more about both here.
Created by Jigidi Published 7 December 2022