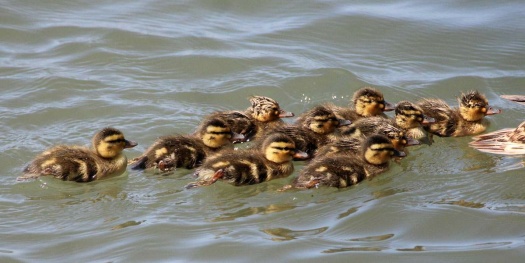 Created by Ginni2 Published 27 June 2022
Why this advertisement?

Ducklings can't really be protected, canoekaw. Big fish come up from below and raptors come down from above, so being in the middle of the group doesn't help them, like it does with a bison calf, for example. I've seen adult bison form a circle around their calves and face off wolves.

True, Ardy, but one of them is messier than the others. I think they're all fine, though. It was a real treat to see them.

I was afraid the messy one was injured, Patsy, but several of them have a bit of the clumped up head feathers look. Maybe they swam through some goopy plants. I think they were all healthy.

LOL! Too bad I won't remember either term the next time it comes up, Jacki!

Perhaps when they form a 'raft' they look like a larger 'duck' in the water and are somewhat protected from predators.

Interesting about what they’re called in the water and on land, thank you Ginni :)

A really great photo and Jigidi U too! Thanks!!

A couple of them look like they are having a bad hair day. lol So cute and I learned some new uses for rafts, paddling and brood. Thanks, Ginni.

Big family! One duckling's head has different markings. Or is it just wet and not groomed?

While I would not wish to use this "raft" as a paddleboard, they are packed so closely together I understand how the word became a term for ducklings in water. But I can go for "brood" or "paddling". Thanks!!

You're welcome, Jacki. And you made me curious, so I found this. "If the group of ducks is in the water swimming, they are called a raft. A group of ducklings is called a brood when they're on dry land." A group of ducks on water is also called a paddling. I like paddling best. Although I don't understand why ducklings would be a brood no matter where they are!

What an adorable herd (flock? group? litter?) of ducklings. Thanks Ginni!