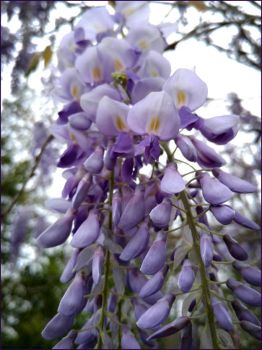 Wisteria are blooming all over town now, with their heavenly fragrance promising Spring.
Created by LinM Published 5 May 2019

So pretty. Mine is blooming now all through the top of a golden rain tree. grins!☺

Thank you, @Ms_Maddy ! The wind had them dancing the evening I took this picture.

I'm glad you like it, @irmachac . It was taken in my local park.

I agree, when young, you memorise in a different way than when you are, say, in your forties, or sixties, or eighties, or ... :D In the end, we are all just plain practical as far as languages are concerned: if we need something, we learn it, and if we don't need it, we don't. Have a good day!

I continue to be amazed at the linguistic ability of the rest of the world! We are so backward in America using English as the only language. I wish I had more opportunity to learn another language when I was younger and it was easier. Of course, it's still up to me what I choose to do now... (meaning, nothing is stopping me from studying a new language). :-) So, let's use English! Then I am move certain that what I mean to say is what I am saying (through Google Translate).
What a nice development this is, @Dulsineja !

Hi Lin, English is no problem for me. :) I have had far more lessons in English than in "Serbo-Croatian" (back then when I was in school, we had one year, plus there has been always some contact with the language) - however, I cannot really distinguish between Serbian and Croatian, that is why I don't like to use it unless for very informal situations because some people are quite sensitive in this respect. So, English comes in handy as the neutral variant. I do understand the language very well, but as I said, I am somewhat reluctant to use it.

@Dulsineja , really? I completely rely on Google Translate for anything other than English (the only language in which I'm fluent). I had only 2 years each of Latin & French, and so I can't carry on an actual conversation in either. I lent my son my Latin dictionary when he was in high school, and was chagrined to see that my dictionary was older than his teacher! Shall we converse in English?
@Dulsineja, stvarno? Potpuno se oslanjam na Google Prevoditelj za bilo što drugo osim engleskog (jedini jezik na kojem govorim). Imao sam samo dvije godine latinskog i francuskog, tako da ni u jednom ne mogu nastaviti stvarni razgovor. Posudila sam sinu moj latinski rječnik kad je bio u srednjoj školi, i bio je žalostan vidjeti da je moj rječnik stariji od njegova učitelja! Hoćemo li razgovarati na engleskom?

Hi LinM, thanks for writing again. :) I am also more of an observer than gardener. :) I do help my parents, mostly with vegetables and fruit trees. We also start the year with snowdrops, common primroses & violets, eranthis hyemalis, black hellebore, all of these grow wild as well as in the garden. -- I am sure you will enjoy your flower beds, as always, it is more interesting to observe the growth and blooming of something that you've planted yourself. :) -- Hopefully the weather finally settles down and spring rolls somehow into summer. :)
(Izvinjavam se, malo mi je bilo lakše pisati na engleskom.)

Hello, @Dulsineja . One minute you think its Spring (or even a slide back into Winter), and the next minute, -- Summer! Yesterday we had rain and, though they predicted severe thunderstorms, the storms missed us. But today it got up to 90 degrees F (32 degrees C)! And it's only mid-May! I'm doing well and I'm beginning to dig in my flower beds. I haven't set out new flowers in years, I've just been "coasting" on the shrubs and perennials that reliably reappear each year. In my yard, peonies have been blooming this week, though tulips and daffodils have come and gone, and snow drops are usually the first flowers I see. I hope I can keep up my enthusiasm!
Pozdrav, Dulsineja. Jedne minute pomisliš na proljeće (ili čak na klizanje natrag u zimu), a sljedeću minutu, - Ljeto! Jučer smo imali kišu i, iako su predvidjeli teške oluje s grmljavinom, oluje su nas propustile. Ali danas je došlo do 90 stupnjeva F (32 stupnja C)! I to je tek sredinom svibnja! Dobro mi ide i počinjem kopati u svoje gredice. Godinama nisam postavljao novo cvijeće, već sam samo "šetao" grmljem i trajnicama koje se pouzdano ponovno pojavljuju svake godine. U mom dvorištu božuri su cvjetali ovog tjedna, iako su tulipani i narcisi došli i otišli, a kapi snijega su obično prvo cvijeće koje vidim. Nadam se da mogu zadržati entuzijazam!

I'm so glad you are finding these inspirational, @niccolino59 !
Thank you, @Dulsineja , for stopping to share your thoughts. We're all tired of winter, aren't we?
Hvala vam, Dulsineja, što ste se zaustavili da podijelite svoje misli. Svi smo umorni od zime, zar ne?
Except for @ulangariver Nev, who must wait 6 months or so to be rid of his winter. But in the meantime, (daffodils, you say?) do check out my Woodland Daffodils (2 sizes! -- I'm starting to learn the ropes here, with thanks to Nev for his patient instruction).

How gorgeous. I keep saying I must get one to hide a brick wall in my garden, but this has inspired me to take the plunge!

I'm glad you enjoyed it! I went back to the park where this was taken a few days ago when a storm was brewing (we've had quite a bit of rain lately). The bunches of blossoms were swaying and bobbing in the breeze and the blue-gray sky agreed with the dropping temperature. I guess, it's just Spring...
Drago mi je da ste uživali! Vratio sam se u park gdje je to snimljeno prije nekoliko dana kada je pila oluja (u posljednje vrijeme imali smo dosta kiše). Gomile cvjetova lepršale su se i povijale na povjetarcu, a plavo-sivo nebo složilo se s temperaturom pada. Pretpostavljam, samo je Proljeće ...

Thanks, Lin. :) The weather is so lousy over here that I am not taking any photos.