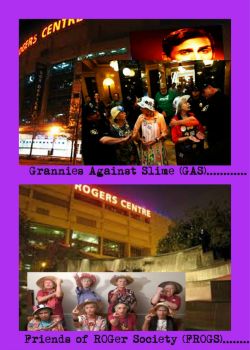 Further-Farther-Bonga was once more in the news today, as Mr.Roger Bugosi's newly opened fashion
emporium was the scene of a confrontation between the "Grannies Against Slime" (G.A.S.) and the "Friends of ROGer Society" (F.R.O.G.S.).......
As words between the two groups threatened to become a battle of the handbags, Bonga-Bonga
Security guards (BO.BO.S) had to escort the G.A.S. out of the building, as the F.R.O.G.S. waved goodbye in their own inimitable fashion......
The magnanimous Mr.Roger declined to press charges, limiting himself to comment : "I believe those ladies to have a false impression of me - but my pip shall never be toodled!".......
Created by lelabugosi Published 24 October 2013

Of course, dogdaze simply said that uncle roger could be found there......at that time......he may simply have been visiting.....

I am a little concerned about some of Roger-Slime's neighbors. Poor Fibber McGee and Molly are used to having The Great Gildersleeve next door, not the slimiest-of-all-Bugosis.

Just wondering Mr. Bugosi...ummm when should I expect my endless joy and sunshine...sort of?

Perhaps they just left for Wisteria Lane??!!! Dogdaze - did they? - oh you are chewing T-bone steak!!

How fabulous!! Dogdaze you are a real hero!! G.A.S. girls let's make a strategy!!

Good Dog, Dogdaze!!! I have a nice, juicy T-bone steak for you. For no reason, mind you. Just because you're a Good Dog!

G.A.S. GIRLS UNITE!! Dogdaze are you ready for the BAD TASTE??

G.A.S. is lining up Sis_Ineeda's help (http://www.jigidi.com/puzzle.php?id=7OZ1Z0KT) with the crack shooters from Winchester Cathedral and their Coach is creating some really really good salt pellets to help salt Roger's wounds. Hopefully, Dogdaze can sniff out that slime-bucket Roger in a few days and we'll be hot on his trail/tail! (Memo to self...pick up more doughnuts...and a sausage roll for Dogdaze.)

Every time I see this picture, and the previous puzzle picture, it makes me want to go out and boycott the boutique again, and all over, too. Come on, all you GAS gals, let's light up the flaming torches and really let Roger know what we think of him and his slime!!!

I'll take two and raise you! And good to see you again as well, too, two.

Well, Ferris Bueller did have a day off ya know. So 3 hours isn't that long.

Oh the party is still going here?? Look at these lovely ladies.

Yes........It was all very strange, because later on I lost her in the crowd - eventually found her, curled up asleep under the floorboards of the House Of Fun.......

Was she running on the inside of it as it turned?

I bought Mrs.Bugosi a hamster skin coat last week. Took her to the fair last night, and it took me 3
hours to get her off the Ferris wheel.............

Ah, the snail races! I love the snail races. In fact, I used to own a racing snail of my own. I entered it in a couple of high-profile events and found it just couldn't keep pace with the faster snails. So I carefully removed its shell to lighten it, oiled its underside to make it glide easier and fed it steroids to make it stronger. But still it couldn't win. It was just too sluggish.

Ah, there you are, squirty, old bean!........I have just spent a very pleasant afternoon with Sista Ineeda - Took her to the snail-racing track in Further-Nearer-Bonga for a little flutter........and I now know all there is to know about her habit - I promised to delve further into it when we next meet.......

I fear there will be nothing but heartache for Sir WinnyB in his pursuit of the Sista, for hers is a hard habit to break.

Better late than never, gemmy - coffee and doughnuts? - I'm there faster than fast!!

Sorry I am late for the protest G.A.S...some stupid mall security guard searched my shopping bag and found the stink bombs (for that stinker, Roger)!!! We can always regroup and plan a new strategy at Him Tortons over coffee and doughnuts...as the Beach Boys (or should that be reversed to Beach Boys?) say: Go, Granny, go, Granny, go, Granny, go!!! Those F.R.O.G.S. should be "slimed"...every Canadian realizes how Rogers can't be trusted...we must stop the international spread of corporate greed!

Any time Heidi, any time - just say when!! It doesn't necessarily need to be in front of that shop really!!! Some nice place would be great!!

Oh, I sense the budding of sweet romance in the air between Sir and the Sista. I'm ready for a bit of pure round here

Well hello Sir Wainthorpe. You're very funny. Ha ha ha. How would you like a nice big slice of cherry pie and a glass of tadpole wine sangria?

I liked all the Hats!
As for the Frog Gas I hope their animosity has fizzled out so people can shop in peace.

Helloo Juneee......you're quite the stunner yourself!......
And here's a joke for the dastardly Mr.Squirty-pie......
TEACHER: George Washington not only chopped down his father's cherry tree, but also admitted it.
Now, Louie, do you know why his father didn't punish him?
LOUIE: Because George still had the axe in his hand.....

Well, apparently with all the excitement, it was a bumper day for business at the emporium.......as they say "There's no such thing as bad publicity"!.........

I stand far back from protests & enjoy all the trouble without being involved in it. Those 'FROGS' are really some bunch. Their 'secret' wave is something to not be desired .... unless it's out the car window!!!
Thanks Lela! :)))
(time, 1:56)

Those WERE tasty pomegranates, weren't they? And plenty of butter on the popcorn. We GASsers need to do this again.

There you see!! I smoked the peace pipe!!! - and you didn't understand....... sigh!! We didn't want to go inside at all - OH,NO - we just enjoyed the pop corn, some lovely pomegranates and the pipe tobacco!! P-squire, don't I understand you!!!

Oh My Sir W, doesn't take you long to set your sights on a lovely lady

We were many more GASSERS than that really!!! Bad photo - manipulated!!!

...and you'd be the one to know all about granny hooliganism!

Well, as it so happens, I missed all the fun as the protest took place in the afternoon.......otherwise I would have been forced to take action on behalf of my misunderstood relative.......
I believe this type of granny hooliganism is totally out of place in a shopping centre of ill-repute......I mean good repute........

OK Buckeye, if you say so. But they look like they're just more thugs added into the volatile violent mix of hostile hostility to me!

Thank goodness the heroic BO.BO.S were able to diffuse the situation....

I believe BOTH SIDES must have brought in outside protesters . . . thugs . . . from the mainland. Surely the ladies of F-F-Bonga would NEVER! I mean NEVER!

Of course, GAS and FROGS don't mix. Anybody could have told them that!

OH MY! Only upon SOLVING it and ENLARGING it did I see all the violence and hostility!