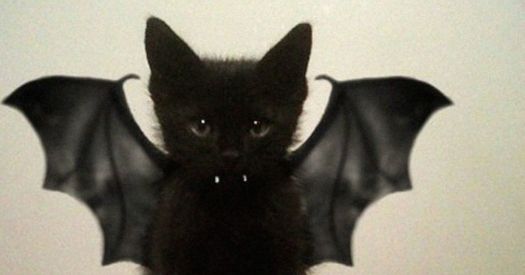 Ancient Egyptians worshipped cats of every color, even blacks one. Up until the early Middle Ages, other cultures viewed black cats as good luck. But somehow, over the years, black cats got a bad reputation. They were accused of stealing souls, shape shifting and consorting with witches and the underworld. Even in more enlightened modern day, they still are sometimes discriminated against.

For example, a black cat was blamed (or credited, depending on whether you like the Cubs) with turning around a baseball pennant race in 1969, according to mlb.com. The black cat had mysteriously appeared in front of the Chicago Cubs dugout in Shea Stadium. The Cubs lost the game and went on to lose the pennant in an epic collapse—a star-crossed franchise supposedly double crossed by a black cat.

Luckily, it seems as though black cats are making a comeback. Let’s take a look at how people’s perception of black cats has changed throughout history.

Ancient History: The Golden Years
In 2800 BC, ancient Egyptian cats, including the dark kind, were revered. In fact, the Egyptians worshipped a cat goddess, known as Bastet. Bastet was known as a goddess of cats and was seen as a guardian against evil spirits and disease.

Domesticated cats were believed to bring good luck to their owners and were seen as magical. Cats at home were treated like royalty, dressed in jewels and fed well. Some cats were even mummified, after they died. There were even severe punishments for injuring or killing a cat, including being sentenced to death.

There are many art artifacts from ancient Egypt honoring felines from paintings to statues, that can be seen today at art museums around the world.

Early Middle Ages: A Symbol of Good Luck
In the 8th century, sailors and fisherman used black cats as sailing companions and good luck symbols, not to mention effective ratters. Additionally, sailors would monitor cat behavior to predict the weather.

In the book of Weather Proverbs, several anecdotes are made about cats’ weather predicting behavior including, cat sneezes as being a sign of rain, cat snoring meaning bad weather is approaching, and the behavior of a cat performing self-grooming to mean good weather is coming.

Middle Ages: Dark Days
In the Middle Ages in Europe things went sideways for cats. In Celtic mythology, Cat Sith, or Sidh, was a black fairy with a white spot on its chest that in various tellings could steal souls or shift nine times into human form.

In the 12th century, it was believed that during satanic rituals the devil would descend as a black cat, according to Medievalists.com. Heretical groups were accused of associating with and worshipping cats. Lonely elderly women who cared for cats became identified as witches. Pope Innocent VIII declared that the cat was the “devil’s favorite animal and idol of all witches.”

Some believed a black cat crossing your path in the moonlight was a sign of an upcoming epidemic. In Italy, a black cat lying on the bed of a sick person meant that person would die.

Historian Irina Metzer wrote that the independent and stealthy nature of cats scared many because the cat “stands on the threshold between the familiar and the wild.”

Colonial America: The Witch’s Familiar
When the Puritans came to the New World and settled in Salem, the fear grew. During the time around the infamous witch trials and afterward, black cats were persecuted, including being burned on the Shrove, or Fat Tuesday, before Lent to protect homes from fires.

People who owned black cats were subject to persecution. The felines were often believed to be “familiars” with witches, used for spying and other dark magic.

Black cats also became a popular Halloween symbol, often depicted as riding on the back of witch’s broom.

Black Cats In Present Day
In modern American society, most people don’t necessarily believe the old superstitions about black cats. In fact, there has been a renaissance for the raven-haired beauties.

August 17 is now recognized as Black Cat Appreciation Day in the United States, according to aspca.com.

Black cats also are celebrated on social media. Facebook has dozens of appreciation and rescue pages dedicated to the much maligned meowers. The “For the Love of Black Cats (Black Cat Appreciation Page)” has 433,000 “likes.” Not bad for a historically disliked animal.

The Cat Fanciers Association recognizes 22 black cat breeds which include:

Brigitte Cowell, a member of several committees of The International Cat Association, is the owner of a jet-black Savannah, named Barack for the former president, and nicknamed Baz.

In addition to the “look,” Cowell says black cats have another advantage.

“Black cats feel sleeker and more lush,” Cowell says. “Judges have told me they could pick one out blindfolded, the hair shafts of a black cat are packed with melanin.”

There are even black cat gifts available to celebrate these precious pets, like Dimension 9’s black cat coffee mug for those that love their cats—and coffee—black. Or there’s the Design Imports chef’s apron, which features a black cat design. It’s a fun, vibrant way to protect your clothes while spoiling your midnight-colored cat with a midnight snack.

Yet, there is room for improvement.

In some shelters, black cats are less likely to be adopted.

“When we have big adoption events, it’s not uncommon that the black kitties are the last to go,” says Ana Bustilloz, the director of communications and marketing for the SPCA Los Angeles.

Instead of color, Bustilloz says she wishes adopters would concentrate more on the personality of the pet. However, she says generally, “people are more drawn to colorful varieties.”

However, some seek out the pitch-colored pets, particularly if they “want an adoption to be more meaningful and impactful.”

Two of the best known are Salem Saberhagen from “Sabrina the Teenage Witch,” and Binx, from the movie “Hocus Pocus.”

A mainstay of the 1997-2003 “Sabrina” sit-com starring Melissa Joan Hart, Salem is a former human trapped in a cat’s body. Despite his mischief, greed, and egocentricity, Salem is a beloved character and had best scene-stealing one-liners in the show.

Binx, from “Hocus Pocus,” was the immortal black cat incarnation of Thackery Binx, a 17th-century boy transformed by witches. He is one of the movie’s heroes, whose soul is freed when the witches are defeated.

So even though Salem and Binx have roots in old folklore, they are much-loved characters—even a hero! Things do seem to be turning around for black cats.

If you think nothing but bad luck befalls black cats, consider the tale of Blackie. In 1998, British antiques dealer Ben Rea bequeathed this $12.5 million fortune to the last surviving of 15 cats he owned as well as a number of cat charities. As part of his will, there were instructions for the care of Blackie through the cat’s remaining days. That’s one black cat who was deeply loved!

By Greg Mellen
Created by jlhdavis Published 25 October 2018
Why this advertisement?

Thanks for the history of the black cats. I'm not superstitious so I like them as well as any cat. Thanks for sharing.