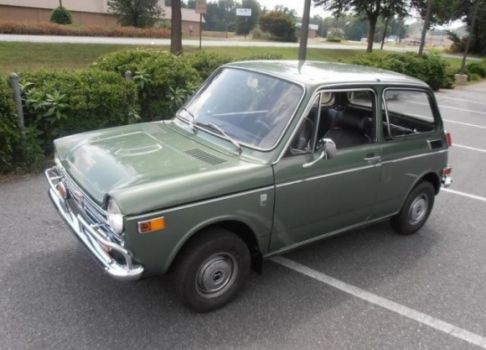 This was a pre-Civic Honda import that had a two cylinder 600 cc motorcycle engine modified to work in a front wheel drive car.
The wheels/tires are 10" in diameter, and the car was so small that sitting in the drivers seat with my left shoulder touching the driver's door, I could stick my right hand out the passenger side window.
Fun to drive, not very fast, but got over 40 mpg, which was good thing, since the fuel tank was only 6.9 US gallons.
Created by racoon Published 26 June 2015

Hi racoon, I will post two Hornet's from 1933 one a red saloon the other a blue sports.
You are correct The "Mini" type Hornet of 1962/ 63 had as you call it (the trunk) attached to the back of the car. I had mine for three years then traded in for an MG Midget sports car.

CJ45 - I remember finding some information, so Google must have figured out what I was looking for, even though I probably used one of the incorrect spellings of the name.

And repeating the search now, I do remember landing on the Wikipedia page for the "Wolseley Hornet (1930)" which has a link pointing you to the "Mini" entry for the 1960's version of the Hornet.

The Mini entry has information that suggests the Hornet was a little longer than a Mini Cooper, probably because of the trunk.

So I haven't completely lost it quite yet.

racoon you are hilarious old fossils comes to mind. Did you research the original "Hornet" made by Wolseley before they were taken over.

Huh? What? When did this become a discussion of Wooly Mammoths? :D


I didn't even notice the misspelling(s), even though I did some web searching to find information about the Worsely/Wolsely/Wolseley Hornet.

Thanks dave_derby, I went back to my puzzle and I did spell it for the puzzle correctly. Thank goodness. I understand about age thing I sometimes have the same problem.
Regards Clive.

I didn't get it quite right CJ45. The name is actually Wolseley. I put the error down to advancing age!
Regards,
Dave D.

Thank you Dave_derby for the correction you are quite right.

Shouldn't that be a Wolsely Hornet CJ45?

Certainly were imported into the UK - there were quite a few around - nearly always orange - as were its even smaller brother the Z360. Were cheaper than the local product and very very tinny - in common with most Japanese cars imported into the UK in the early 70's, the bumpers used to rust right through! Quality engineering in those motors though.

Hi racoon thanks for the information the size as you say were similar. My first car was a Worsely Hornet a mini with a boot (trunk) on the back. will send picture but the wheels are not correct. Should be mini wheels.

CJ45 - they might not have been, but then the UK already had small, efficient cars when the "gas crisis" started in the early '70s. The US was mostly driving huge cars with big V8s. These are about the size of an early Mini Cooper.
I found a picture of a VW Beetle, early Mini Cooper, and Honda N600 together for size comparison:

ptv8347 - The only problem with them was the engine wasn't very reliable. I had mine for just over three years, and had the timing chain break twice. I had found someone near where I lived that collected and restore these and the similar Honda Z600s. He sold me the parts, and I found a mechanic that knew how to work on them. The second time it broke I sold it to the guy I got the parts from, and bought a VW Transporter.

A friend of mine had one of these. I almost considered buying it when he was selling it.

Thanks for the puzzle racoon never seen one before probably not imported into the UK .