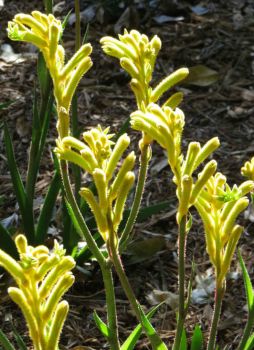 This is a great photo, Robyn, I have never seen this before.

Thanks smllpkg, snooker ( they are soft & fuzzy!), Suzy and Dave - I'm not surprised that these Aussie natives are new to so many - but I'm pleased to show them off:)))

They're reaching up for the sun! Fantastic photo, Robyn!!

Wonderful light on these, Rob!

They look sort of fuzzy or prickly.

Very pretty and new to me, too.

Thanks ruby - they are a bit unusual!!!

Never seen one before. Most attractive flower.

Thanks Cathy - I'm not sure if these have travelled overseas:)))

Wonderful picture Rob!!! This one is new to me. I've never even seen a picture of it!!!

Thanks Barb - they're native to Western Australia - and like sandy, well-drained soil and hot weather!!

That's good news chookie - she must have just the right spot for them!!! Thanks!

These are fabulous Rob, I love this colour, but I think the red ones are my favourites. Thanks and hugs, Janet

My daughter just planted red ones in her garden, rob. She planted yellow ones last spring and they did so well all throughout our hot summer that she thought she'd put more in. They tripled their size over that year and they look so colorful in amongst her other hardy plants. tfp rob :))

New to me but very pretty, Rob :) Thank you for posting :)

It was a lovely colour Shirley - and they had the other colours nearby!! Thanks!!!

So full of joy!