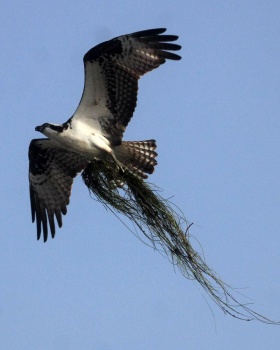 Extra Male and Extra Female are still hanging out together. I even saw Extra Male land on Extra Female's back a few days ago as if to mate, but he flew off again without doing anything. Maybe he's too young. But he's still trying to make a nest. I think now that he laid the long sticks over the two crosspieces on the high voltage power pole to make a floor for the rest of the nesting material by accident. That's the nest I got the electric company to remove. The current nesting material just drapes over the crosspiece or falls off entirely, which is fine with me. There is no safe place for them to nest!

https://www.jigidi.com/created.php?id=6dnitmkq
Created by Ginni2 Published 20 May 2022
Why this advertisement?

Dad chased the extras off his territory regularly months ago and they stopped encroaching, at least when I was there, which is only a few hours a week. Recently Dad tried to chase them off the power pole at the edge of the territory, where he had never bothered them before. That was when the chicks just started flying and he might have been worried that they would hurt the chicks. Extra Male flew across the street, but Extra Female stayed on the pole and Dad didn't bother her. Previous chicks used to hang out on those poles and wires by the street. I haven't seen them doing it this year, which means they have fewer resting perches. The residents don't mind other ospreys in the non-breeding season; I saw six one morning, on poles or in the air, while standing by the ranger station. This was after the chicks had flown down to South or Central America. I've been told there are areas with lots of osprey nests, but I can't find anything online about it. I think there would be enough fish for two families here, but I'm not sure. Maybe the Extras should fly east to Lake Hodges. There are tall dead trees that would make good nest sites, and I'm pretty sure there are plenty of fish in the lake.

I can understand you're torn. 'Your' ospreys have been used to having the area for themselves. But this new pair has been around for several months now, do you notice any different behaviour in your resident ospreys? Maybe they wouldn't mind if the new platform is outside their territory??

I met a couple of women on the trail who said they would try to get the city to put up another nesting platform across the river from the resident ospreys' platform and out of their territory. I emailed them photos of the extra ospreys, but haven't heard back. I'm torn about the idea. I don't want anything to make the resident pair uncomfortable.

Poor ospreys.
You took a great photo though, and maybe this is a good trial run for next year??
Knowing what not to do is important too :)