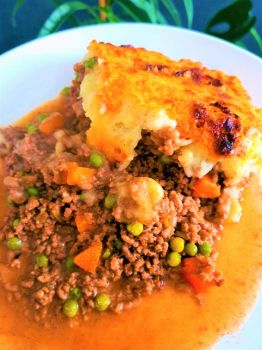 Posted on Reddit by MaxRamsey, whom I have always found entertaining, and whom tonight I discover to be foreign to Miami's shores, if not actually insane, when he wrote,

"May I suggest adding a spoonful of marmite and a splash of Worcestershire sauce when you do, it adds a real depth of flavour :) "

@laskadog i looked it up, and yes, i believe you.

When I'm lazy, I make an up-side-down Shepherds pie. I cook the filling...make the mashed potatoes...and then plop the filling on top of the potatoes and serve! *lol* dj

i've had variations of this, always with ground beef, or with biscuits or pie crust on top, not potatoes. what is marmite?

I make this often.My Mum(from Lancashire) only made it when we had leftover roast beef, with the leftover gravy which made it scrumptious.She would never put corn in it though.She said growing up in England in the 20's people over there didn't eat corn, only cows did, so she'd put bits of carrot.When I make it now I put corn niblets, never creamed corn, which makes it too sweet.I don't put cheese, put I admit to having ketchup on the side, especially if it's someone else's and I don't like it.or HP sauce.

I called it Shepherd's Pie. It had been quite some time from the last time I made it.

My Dad made this, although he called it Shepard's Pie, even though it was made with beef.
He cooked ground beef, broth, and vegetables in a pot like a stew. The last step was to cover the top with mashed potatoes, and then he put cheese on top and put it in the oven to melt the cheese.

I had Cottage Pie once, when Paddy took me to an Irish restaurant, and I was rather nonplussed. It was just mashed potatoes and ground beef, with a few peas, and the gravy and mashed potatoes were cold. He was shoveling his down and I made agreeable noises, but he could tell I didn't like it. He took up a forkful of mine, looked horrified, and vowed to get me a new plate, along with the heads of the chef's sons, but I swore up and down that it was fine, as I didn't want everyone spitting into it. Plus, the chef was a good friend.

Later, I looked it up at Wikipedia.

"Shepherd's pie... is a ground meat pie made with lamb, hence the namesake, with a crust or topping of mashed potato; it is most likely of English origin. Cottage pie is the same as shepherd's pie with the exception that it is made with beef or red meat.

The dish has many variants, but the defining ingredients are ground meat cooked in a gravy or sauce with onions, and a topping of mashed potato. Sometimes other vegetables are added to the filling, such as peas, sweetcorn, celery or carrots. It is sometimes also gratinated with grated cheese."