A Collection of Owl Brooches 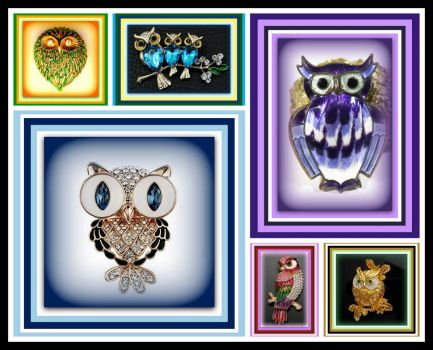 As recognized as owls may be, most people don’t actually know a whole ton about them. But the truth is, these birds are incredibly complex creatures with a catalogue of surprising facts.

1. Owls are plentiful: Depending on hoo you ask and what classifications you consider, there are between 150 and 220 species of owl on the planet—only 19 of which reside in the United States or Canada. For the most diverse owl communities, you have to go to Asia.

2. Owls are everywhere: If you ever find yourself under the watchful guise of a group of owls, you’re out of luck because there’s nowhere to run. Owls live in diverse habitats—from forests to suburbia—and are found on every continent on the planet (except Antarctica).

3. Baby owls are called owlets: Baby owls—or as you may now call them, owlets—are born without flight feathers. That means, at a young age, these weird-looking cotton balls with eyes and beaks are stuck on the ground.

4. A group of owls is called a parliament: Oddly enough, while a group of owls might actually get more done than any elected governing body, the term parliament in the case of owls actually stems from C.S. Lewis’s The Chronicles of Narnia.

5. Owls’ eyes are nearly immobile: An owl’s enormous eyes might be capable of amazing vision, but it’s his flexible neck that gives him a full view of his surroundings. Often, owls bob and tilt their heads to improve their depth perception.

6. Owls have three eyelids: In case they forget a pair at home, owls always have two eyelids to spare. In all seriousness, one’s for blinking, another for sleeping, and the third for keeping the eye clean. All birds actually have that third one, and it’s called the “nictitating membrane.” Talk about a five dollar word!

7. The owl is a stone-cold killer: You might be tempted to say awww when you see the big-eyed face of an owl, but its prey knows better. Their talons are incredibly sharp, and they have an amazing grip strength of 500 pounds per square inch—that’s eight times stronger than a human’s!

8. Owls swallow their prey whole: When they decide to kill, they first crush their prey. Then they tear it into strips before swallowing it whole, digesting it, and vomiting up the fur and bones in a pellet.

9. Owls hunt quietly: Thanks to specialized feathers on the front of their wings, owls fly with reduced turbulence and in almost total silence. That’s a good thing, since their hunting requires sneaking up on unsuspecting critters.

10. Barn owls have enormous appetites: They consume about 1,000 rodents per year and are so effective at gulping ’em down that farmers try to attract barn owls to their fields.

11. Some owls hunt other owls: Great Horned Owls are the greatest perpetrators of intra-species violence.

12. The females are the biggest and baddest: Plenty of owls are dimorphic, which means their are visible differences between males and females. Female owls are far more richly colored. They’re larger, heavier (just don’t tell them that!), and more aggressive, too.

13. Owls don’t necessarily migrate: They’re more prone to irruptions, or dramatic, less-organized trips to new lands in search for food. In other words, owls end up far, far away from home after they get the late-night munchies.

14. The owl’s face is basically an ear: If you called an owl “ear face,” you might be considered a bird bully, but you wouldn’t be wholly incorrect. Like a satellite dish, the owl’s face—with the help of some special feathers—channels sound to the bird’s ear holes.

15. Speaking of ear holes, those on owls are asymmetrical: The owl, like humans, has two of them. Unlike humans, however, the holes aren’t on the same plane—one is higher than the other. This allows owls to generate a 360-degree map of its surroundings based on slightest delays and the discrepancies between sound volume within each ear.

16. Owl ear tufts are like magic: Hilariously, owls with tufts are pretty much stuck in 1975 because those feathers act as a permanent mood rings, expressing emotion depending on their positioning. They also help with camouflage and can show aggression.

17. Not all owls hoot: It might be tempting to refer to an howl as “Hoot-ie and the Blowfish” or “Hootie McHoot-Face,” but not all owls, in fact, actually hoot. Some owls screech, whistle, or squeak. Sometimes, barn owls hiss when they’re feeling threatened, which is oddly terrifying.

18. Owls go way, way back: At least 58 million years ago, owls were flying around just like they are today, at least according to fossil records. In a related, slightly disturbing note, an owl fossil named Orinmegalonyx oteroi shows an owl that stood three feet tall. That would be up to about your waist! That’s one big bird.

19. Owls are symbols of wisdom: The ancient Greeks considered Athena to be their goddess of wisdom, and wouldn’t you know it, Athena’s symbol was an owl. By geometry’s transitive property, the owl became a persevering symbol for wisdom and prophecy. Not bad for a bird!

20. Owls are threatened: The world can be a scary place for owls. There’s tons of stuff out to get them: car windshields, wire fences, superstitious folk who just want to keep a good owl down, pesticides. Most dangerous to the owl is the loss of its habitat. So remember to think about these amazing creatures!
Created by grandmapegs Published 19 August 2019
Why this advertisement?

Trish, your choice was a cutie. Love all the info and will have to look up your owls, they sound interesting. Boobook and Morepork. Love to learn new things. Your additional information is interesting and fun. Thank you.

Ha ha - some of the info was funny :) We have morepork owls here in NZ, their hoot sounds like they're saying "more pork, more pork" but I've never tried throwing a pork chop in their direction! I've recently seen a picture of a cute Australian owl called a boobook - look it up, it's quite pretty. It doesn't read scary ghost stories as it's name would suggest :) Like the morepork, it's name is derived from its call "boo book, boo book" ... that's my little addition to your fact sheet Grandmapegs. Oh and for what it's worth, my favourite brooch is the lower right one, the gold one. Rather cute!

Ardy, you are so welcome. Glad you enjoye both the puzzle and the information. Hugs.

Lovely owls, Peg. My friend, Helen, loved owls and had a number of owl pins. Fun. Thanks for the photos and the information. Hugs.

Toni, glad you enjoyed thanks for the note.

Amazing! I never knew so much about owls!