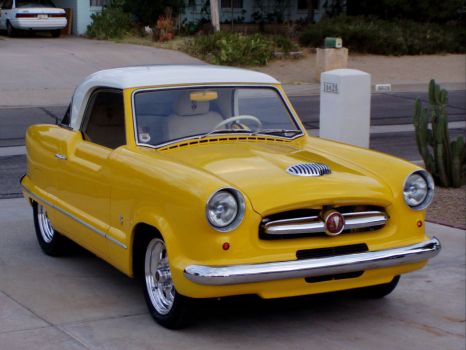 This is not your ordinary Metropolitan. My neighbor is into building hot rods. This one has a Corvette engine, with a blower, and yes, it really scoots.
Created by antlerlady Published 16 June 2016
Why this advertisement?

No room for a seat. Had to be a shelf. Glad you enjoyed the puzzle.

One of Dad's friends had one of these--red with white top. As little kids, we enjoyed riding in the back--can't recall if there was a real seat or just a bit of a shelf.

Glad you liked it.

And I love that Metro! I drove one as a delivery car for my boss back in the late 60's. Thanks very much for posting this beautiful car!

Thanks for cool and interesting puzzle. :-)

yeah, cool, It looks just like a mini Nash of the time.

Some confusion also existed as to what you were actually purchasing when you bought a Metropolitan. They were sold through Nash, Hudson and American Motors dealers, and the Met was a true crossover. It was built in England, but it was designed and engineered here in the United States--specifically for use here--unlike other English cars that were intended for the tight urban and country roads of Great Britain, which didn't seem to work all that well traveling from one big American city to another.

The microcar was a European phenomenon specifically for this reason. Following World War II, the small countries of Europe were scrambling to build anything that resembled a manufacturing base. Motorcycles and sidecars were in use, but poor weather meant that they were an uncomfortable ride for the family. Microcars were developed using motorcycle and scooter running gear, and were a way for returning soldiers to work, and in turn, get to work.

But the Nash Metropolitan--and infinitely more successfully, the Volkswagen Beetle and the Mini--drove a major nail in the microcar coffin by offering consumers cars that were, in fact, cars, and not converted two-stroke scooters with bodywork. Of course they were small, but they were designed to carry passengers in relative comfort and style.
Great looking auto. Thank you antlerlady. If you think this information is lengthy I shall remove it...
I read your profile and deeply sorry for your loss. Bev. 2-27-17..4:48 p.m

He also has a one wheel trailer for the luggage, when they leave town for a car show. He also sold the body shop last month, so he can play full time now, and he does.

Great little car whether a Hudson or Nash...and what a great idea of having the same engine in all your cars, lowers the parts inventory. Antlerlady get your camera out for the next rally gathering.

John88. I don't know how he fit it in there, but i can hear the whistle when he drives away.
Mr_51_viv_ss. I don't think he will change motors, as he likes Vette engines. He also has a Gremlin and a Lark, also with Vette engines. He had a 34 Ford pickup, which also had a Vette engine, but sold it last year. Did i mention that he owns a body shop? He is 78 and shows no signs of slowing down. Every time his car club goes for a run, they gather in front of his house, and i get quite a show.

It appears to be a Hudson Metropolitan and not the Nash Metropolitan. That is a Hudson emblem in the grill.
Still cool.... maybe next time he'll put a Hemi in it?? or a Flathead Ford V8?