We Are But Creatures Of The Night..... 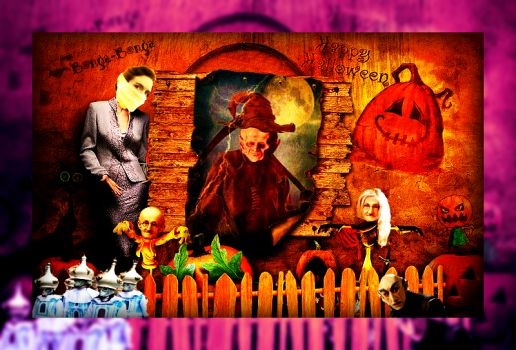 Wishing our faithless followers who have remained faithful, a truly horrific Hallowe'en!
As for those who have deserted our honourable cause......Who cares?
Created by lelabugosi Published 31 October 2015
Why this advertisement?

good as any to remember

Hmmm...why does that sound familiar?

November would be better

Could you put your plans on hold for a while, lela? We're visiting next summer and I'd like to have a peek before it goes!

'He' is 5th cousin to Queenie, not that it shows.

what about the Parliament? careful Big Brother might be listening

he can double up for Guy Fawkes night

Yikes! You scared me.... Even though I'm a few days late.

Well, Mr.Squirt, I can only assume that you became a father at a very advanced age.......

This picture was taken in the basement of unclebluebottle's hardware store - where he stores his prized vintage foodstuffs........

Lots of lightning going on????

My daughter faaaar older, eh? A sophomoric jibe, an adolescent barb AT BEST. But we expect less of you these days, lelabug, as age creeps inexorably up on you and SAPS you of your intellectual POWERS! (Or is the Tadpole Wine finally starting to work its insidious evil on your brain?)

Oh-oh...does that mean you now glow in the dark? Won't help much in disguising you from your adversaries unless you pretend to be a flashlight ("torch" to the UK natives)!

Nooo, I was just struck by lightning!

Mr.Squirt.......your hearty appreciation of this magnificent montage almost (but not quite) brings a tear to the eye.......Happy Birthday to your number-one-daughter ....... who, for some reason, I imagined to be faaaar older, hee-hee!

First of all - Happy Birthday to your daughter patsquire, and then HUGS for you - and then hooray for our host - who has created this wonderful Halloween greeting.. and for his family too - and then Happy Halloween all of you... to the Gnob-Gnobbers too, and everybody not mentioned... Guess that's all - Dogdaze for you too.... and your friends..

Um, have to cut mine in slices. Apples are so good for us

Good morning Junneee! We call them caramel apples over on this side of the pond, and they were wonderful . . . . when my teeth were up to the task!

Isn't this a great new puzzle lela has given us? Hooray for our distinguished host!

somebody mention chocolate? Nom. Here we have toffee apples on Halloween

It's just you, stackables. But I'd be glad to break you off a piece of that Kit-Kat Bar!

Is it just me or does Halloween sound like "Hello Wine"--pour me another glass of that Tadpole wine!!!

Oooooohhhhh - s-h-u-d-d-e-r - who or what is that spooky dark presence beside Mrs.B, above the Gnob-Gnobbers? Creeps me out! I need somebody to hold me! Hugs please!

Well, I just found this (because my schedule is all mixed up) but it is SO MAGNIFIQUE that I am delighted to be solving it, even though I'm late.

By the way, Hallowe'en is my first daughter's birthday!

I've had them sitting on me - they are nice, but not awfully beautiful..

Nope! It was usually a sudden drop in temperature and a sense of a 'presence'.

The Gnob-Gnobbers were just passing by........If there's any trouble - I have a scythe, and I'm not afraid to use it!
Nutty-Biscuit......I would imagine you smelled a 'presence' also, as well, too!

We had lots of bats coming into our house in Italy, but it was a big 13th century stronghold on top of a hill. No wonder! One often felt a 'presence' there!...

I'm guessing that everyone thinks the Door Knob-Knobs are in costume...hope no one tries to pull off their masks...or we'll have an international/intergalactic incident for sure...

Never had pipistrelles, but I used to love catching Little Brown Miotis when I was a youngster. I'd put 'em in shoeboxes and scare the bejeezus out of people.

talking of pipistrelles I have twice had them in my bedroom to my horror. My son has fixed some bat deterrent to my window so hopefully they will keep out.

Why thank you, precious-pebble......someone has to make the effort!

I saw Trouble_and_Frog's posting and was wondering where you were, lela...were you still on the lam...so to speak...but then Halloween is a perfect cover for you to get out and about amongst your adversaries and they will never know who you are! HAPPY HALLOWEEN! And don't forget to let your mum check your treats!

I had to look up 'pipistrelle'!
And BOO! to you too, as well, also, raincoat-infusion!

Pipistrelles are getting high on tadpole wine as we speak! ; -)