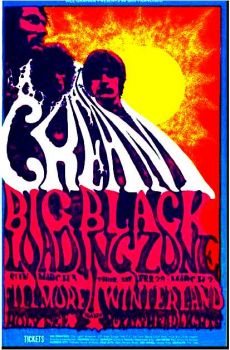 This is another design by Lee Conklin for concerts February 29 - March 2, 1968, but where are we supposed to go? The poster states the shows are at the Fillmore and the Winterland, but it also mentions some big black loading zone. San Francisco is a large city - which loading zone does it mean? Lotta department stores around Union Square, but if we choose wrong, we gotta hightail it out Geary in time to catch Cream. Not helpful, Conklin, not helpful.

I did a little poking around, seems it's two different bands... Big Black and Loading Zone. Didn't know that. So here's my thought... it's 1968. Two groups appear - Big Black and Cream - and after thinking long and hard and the 'smoke' cleared, three years later, the first Starbucks opens... coincidence? It might take up to three years to think "What can we do to a cup of coffee to make people pay $1.20 (1971 prices)? We'll confuse them with size - no more small, medium, large, but we'll use Italian names so they don't know what they're ordering! And no more 'just coffee', we'll make them feel worthless if they don't order White Chocolate Peppermint Mocha Frappuccino or Cold Brew with Cinnamon Almond Milk Foam. And we'll rule the world with Pumpkin Spice!! Yes, Pumpkin Spice!!! Mwwaaaahahahaha!'' Or it took 'em three years to stop laughing, work up a business model, find a bank big enough to hold their profits...

So, that's my idea of how we got roped into paying $6 for a cuppa Joe. Off topic of the poster, but I have such a craving for a Mocha Latte right now...

Silly girl... you didn't have to look up 'ball gag'... I could have sent you one of mine. I have several so and I would be very willing to share (kniw kniw)

Talk about poetic tributes... prom king and queen? I'm not sure assisted living homes have prom kings and queens. Gidget and Moondoggie? You're going to go barefoot? Can I wear a blindfold? Johnny Cash and June Carter? Cash was an addict and a cheat... I'm too boring to do either. Captain and Tennille? Tennile went solo leaving "the captain" holding his organ. Sonny and Cher? He's dead...which probably explains why they get along so well. I was thinking more along the lines of Bonnie and Clyde. Or Boris and Natasha. or maybe Elvira, Mistress of the Dark and
"... the young man in the twenty second row
Who sees you as something more than sexual
More than just our mpp rainbow"

And thanks for explaining our 'rambles'. I think I understand now. I have this nasty habit of drinking coffee all day, so if we are talking over coffee, I am probably talking all day, which equals longer comments than any mortal human can endure.... which leads me to believe you are a super human. ummmmm.... will you teach me how to fly?

Such a poetic tribute - impressive. And I'm SURE the first comment to include the words 'ball gag' (I had to look it up... wink wink).

When I write my rambles, I just think I'm talking to you over coffee... we're the prom king and queen, Gidget and Moondoggie, Johnny Cash and June Carter, Captain and Tennille, Steve and Eydie, Sonny and Cher... as long as we have fun, right?

"Onefinger
He's the man, the man with the 'silence' touch
A ball gag's touch
Such a one finger
Beckons you to enter his web of crap
But watch your back"

Cream... legendary band of the 60's. Founded as one of the first "supergroups", formed in 1966 and disbanded a short 2 years later in 1968. Cream released only 7 albums, 3 of which were 'compilations' and yet sold over 35 million albums (if you need to look up what an "album" was, you will not remember Cream... or the 60's... or know of the horrors of having a scratched record). The group's third album, Wheels of Fire (1968), is the world's first platinum-selling double album. This was not Randy and the Rainbows (though Randy and the Rainbow's "Denise" is one of my all time favorite songs), this was not Jim Bob's Jug Band playing "Kazoo Music for the Heart and Soul" or the upstart pimple rock of the 1910 Fruitgum Company, this was get on your knees and pray to Jesus, cut to the bone, Gorton's Frozen Fish Fillets swimming upstream to spawn, wear sunglasses or you will be blinded by the light, basic ROCK MUSIC.... and though you may not have been a fan of Cream, you KNEW them! Three of the most talented musicians of the 60's together creating legendary music and making hearing aids the #1 selling medical necessity of anyone who wanted to go home and watch "Wagon Train" on TV. Legends of rock and roll. Legendary legends of rock and roll. Legendary legendary legends of rock and roll. And what does it get you?!?!?!?!?

"NUTHIN". Not one brave soul took the time to acknowledge your hard work. Your research OR your witty commentary. You and I both know this has happened before. We are not opening new doors here. You are not Lewis and I am not Clark forging a new path to anonymity. And what is the common thread leading to the unwarranted heartbreak and the snubbing of one mpp in the swamplands of Florida?.... TIM... "Onefinger"..... "the man with the 'silence' touch".... If you know 007, now would be a good time to call, before you spend another sleepless night wondering:

Yeah, I started down the road of current events then decided I'd probably get in trouble and one poster with so few solves wasn't worth it. After that I realized you're the only one reading my thoughts and I'd be safe, but it was too late.

Do you think Ginger Baker was the genesis of the man bun? Did he ever play with Genesis? The last straw was "Invisible Touch" when he threw down his drumsticks and said "That's enough... I'm takin' me buns outta here!" (something I declare every day).

Red hair is often naturally curly - perhaps Baker worked up a sweat while playing, tried to keep the inevitable frizz out of his eyes, and couldn't get pretty boy Clapton to fork over a bobby pin... I am sorry you had to see that...

I'm using my phone to take my virtual Jigidi class this morning so I can't really read where this concert took place, but 5 will get you ten, Big Black was not playing in Portland, Seattle, NYC, Kenosha, Chicago, Minneapolis, Washington DC... well let's face it, with 2,000 cities across the USA and it's territories "protesting", I doubt they could play anywhere without getting their heads put on a stick... just like those little wooden stir sticks found in Starbucks..... go ahead and admit it... you didn't think I could make a connection between Big Black, the riots and Starbucks. Just goes to show you're not the only lawyer Stoddard (later Senator Stoddard) hiding from the evil Jigidi Valance behind rough and tough Big John Wayne (dial your Wayback Machine to 1962)

Thanks for the Ginger Baker drum solo. Thanks to you, Ginger Baker has now been crossed off of my list of greatest drummers. I'm old, I'm old fashioned and I'm picky about my buns. Cin-a-Bon cinnamon buns are good. Hot cross buns are good. Angelina Jolie's buns are extra good. But man buns... not so good. Only yuppies driving their Subaru Outbacks to the My Sh** Don't Stink convention in downtown San Francisco are allowed to wear a man bun... with flowers in their hair. Rock legends, no. Long hair, bushy facial hair, the Geico Caveman look... all good. BUT NO G.D. MAN BUNS!!

Well, I have overstayed my welcome... again. I intended to just leave a short note to declare I was the first to comment on your puzzle, and look at me. Sweaty, near exhaustion and ready for a nap.... but I dare not sleep. Not until I am rid of the image of man bun's rioting in the streets demanding equal respect.... and dozens of local barbers standing at the ready with clippers in hand.

"Don't clip until you see the curl of their man buns!".