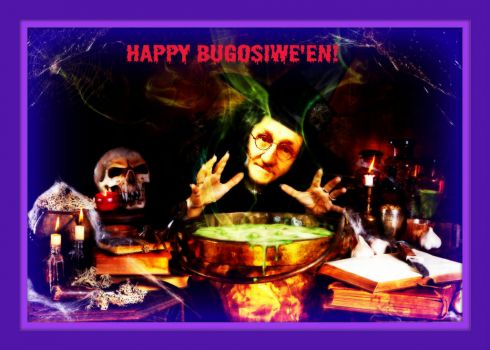 Image attribution: A D.O.L.L.S. resident with a camera

Slimy Roger is always Numero Uno on the Hit List (with salt pellets), Hanne! But I'm beginning to consider these poodle tippers as secondary targets!

What kind of catapult does K-boy have? A trebuchet? Does he use it for punkin chunkin'? Or cow flinging? Or do you mean a slingshot? Those don't worry me. Much.

Mr Squirt you must wish somebody else luck first. Who will you choose?

Grannies against Slime - did you hear the slimy flea coughing??? Insect spray!! Come on!!

Heidi-clock-flopper since I moved to the great American southland over a decade ago, I've started to soak up the prevailing attitude down here that any game taken illegally out of season tastes a good deal better than game taken according to the rules. So whether it's duck season or not, keep your shotgun loaded, put the safety "on safe" and keep it handy for a quick shot any time K-Boy presents himself within range. (Safeties on guns are designed to be flipped "off safe" with ease when the quarry is in sight.) GOOD HUNTING!

As for you Roger, you dare show your face without a hint of shame? Piddle-poop to you!

P.S. Duty calls. I'll be donning full camouflage and body armor in a minute and sneaking out the back door on a mission of the highest importance. I will be attempting the most dangerous feat of all, infiltrating the "church" of Scientology on behalf of one of the major superpowers of the modern world, the Eli Lilly Pharmaceuticals Corporation. wish me luck!

Naw, Kaleidoboy, I wasn't REALLY trying to shoot you. Just scare you away from the path of evil you're starting to tread. You need to stay away from some of those mad Bugosis.... ie MasterHenry, Roger the Slimy, and anyone associated with that habitat of torture, The D.O.L.L.S. House.

Well, Junee, I'd consider it. If I weren't already Practically Perfect In Every Way!

Mr Squiire it seems your hatred of all things Bugosi includes your own relatives who are also tainted with Bugosi blood. Is self hatred in there too because of this? Perhaps it's time to get help

Zombie Queen told me she saw Also and Roger also working late into the night in the stock room of the boutique cutting Mal-wart labels out of wimmins clothing and sewing Coco Cannoli labels in their place.

Or maybe he's spending all of his time with Sister sister Also too. I haven't seen much of her lately!

Grannies Against Slime NEVER launch unprovoked attacks...we stand for freedom and justice for all wimmen...including nuns...and do take a "green" stand, except when it is "green" slime by the name of Roger! Notice how quiet he's been lately...shouldn't a hot shot corporate, corpulent, executive be out front running his corporate, corpulent empire? Not Roger...he knows he's crossed over the line...he's hiding out! We expect dalliances from psquirt but from a member of the "ruling" family...he knows he's shamed the Bugosis and he daren't face the nuns with guns...and salt pellets. Sis Ineeda may be loyal but then she can only see half the story, right? The TEAM may think otherwise!

Ohhhhh man pat meeeeeeeee or whatever the hell you said.

And 3 raps across the knuckles with my ruler. I have notice tensions are running a little high so I have ordered my nuns with guns to stand down. Mr. Bugosi we stand ever vigilant and swear our allegiance to the Bugosis always!

Everybody repeat after me (or don't, as you wish):

Now now, Mr.Squirtz........try and be polite - there is enough animosity here already with the insane limpy-watches wanting to shoot anyone named Bugosi and the grannies-against-slime launching their unprovoked attacks on uncle Roger and his emporium........
Anyway, the way things are going, you may well get stoned by Mr.Biscuit!............

Distant cousin you may CLAIM to be, you green-shirted smallish-pot-wearing creep, but FRIENDS we are NOT!

Oh Dear Kboy, better just fly alongside SLOG for a while until she forgets about you. I hope she didn't put holes in your cape

Someone was trying to shoot me!......I think it was that horrible woman with the limp watches - the one who trades in animals......

also Cookie you spent the night playing with large stones, seemed to be building a fortress of some sort. You were getting into the beck and dragging out more and more stones, like a kid in a sweet shop you wanted them all. We just left you to it in the end.

But still you can compare "slimy", Heidi: slimy, slimier, slimiest - or somthing like that and now we can fill in people in the cathegories!!

Ol' Roger has really gotten himself a reputation! As soon as anyone mentions slime, of any color, everyone here immediately thinks of Roger. There ARE other slimy Bugosis, you know. Roger is not the black sheep of the family. It's a family of black sheep. Slimy black sheep.

If you can't behave yourself, PeeSquirt, at least put away that camera!!!

Dear Cookie when those young ladies asked you if you wanted to eat some jelly and you got carried away with the stuff did they not mention it was made from Vodka and taddy? Naughty naughty little girls.

I only remember crawling around under the chairs looking for my mouth organ! But it's so strange, I seem to remember being on my back and looking upwards, not at the ground! You'd be surprised what some of our ladies wear. And amazed at what they don't wear, at least on Hallowe'en!

Oh what a party, where am I?
Last thing I recall was talking to Karl about the fine stone work and then there was a load boom and some green slime and I awoke here plastered in the wall of the old mill :O

always invite the neighbours to your parties, toodeloo I'm off to bed to rest my weary bones

.... a conversation with God on the big white telephone?.... ah, NOW I get it! I've always referred to it as worshipping the porcelain god.

Oh sob!!! I missed the party. Mother Nature decided to pull a massive Hallowe'en prank on us and we got hit with a storm that knocked all our power out for many,many hours. They even had to cancel all of the Trick-or-Treating!

not to mention a conversation with God on the big white telephone:))

Welcome "out" Tati-Jailbird kiddo! Nice to see you back among the freebirds here in Bugosiland. What you've missed here is not a lot compared to what you've been missing in real life. Glad you're with us again!

Is that a Bubbling Bucket of Bugosi Blood you have there, lelabug? Surely the Bugosis aren't red-blooded, and they're most certainly not blue-bloods! Green seems like it's your color, from drinking so copiously of the seepings of the tadpole.

I wonder what Gawldarn meant with that crack about, what was it, the skinflute? Oh, the mouth organ, that's right. Hmmmmmm, was that some kind of innuendo, y'think?

*** Can't solve right now, be back after golf+dinner!

I don't remember Hanne! I was just having a good time and then I was in prision!

It really sounds interesting, Tati, what did you do with that kind of thingy that had you locked in??

Gawldarn and grannygoat, my time in prison was not so bad and had nothing with the protests. Well my lawyer said that was about... what is the word in English....ahm... frying pan, no, ...casserole, no... pot, yes, this is the word I'm looking for.

Hi Gawlybaby, that must be how I got covered in scratches, at least I hope so

Hello, am I missing. Oh my head. I really put too much effort into playing the drums on that horrid boys head, and see he is a little moaner as well. Great party though nothing like the great outdoors on halloween and the conga round the cemetery just finished it off nicely, one or two people I used to know joined in and there was a lot of moaning that seemed to come from underground. Too many gin and taddies by then to care who I woke up. Hope you all got home alright

Last I saw of Junee was at the party. I recognized her legs sticking out of the top of the shrubs next to the pool.

Tatinha! I knew I recognized you from somewhere! Prison! How are ya' gurl? How many ink spots ya wind up with this last stay?

Oh my wasn't Halloween fabulous? Thanks so much Junee for hosting the party last night. Whether it be a back yard get together, a smoke filled cabaret or one of the finest opera houses of Europe, you sure know how to put on a show and the 'Salute To Polly Darton' was genius. SLOG on the washboard, grannygoatlady playing spoons. Junee using the back of MasterHenry's head for a snare drum bordered on insanity and of course Peesquirt playing the mouth organ as usual. All of those extra hours of practice are really paying off Pee!

Thanks Lela. No, it's not. Mula Sem Cabeça is a headless donkey, we're not so advanced down here!

I have been informed that all the residents of the D.O.L.L.S. were treated to a cup of Dr.Adonis' 'special brew' and, as far as is known (it's a bit difficult to tell), none of them are any the worse for it.....

After spending some time in prison, I'm back to this land of enchantment and ready to be creeped up by Bonga Bonga/Bugosiland inhabitants. I think Dr. Adonnis has discovered the hangover cure! Tadpole! (Brazilians don't celebrate Halloween, we're more up to Curupira, Boitata, Saci Perere, Cobra D'Agua e Mula Sem Cabeça)

Oleander...that would solve a lot of problems PERMANENTLY, Plumpy!

And a few slugs of fig wine wouldn't hurt, either. (For those who have partaken of the Dr.'s brew.) And for the good Dr. himself, I have some rare vintage extract of oleander.

Dr. A. needs some pomegranate squeezings in his brew to make it efficacious.

The area surrounding the dunking chair at the north end of the tadpole pond has been sealed off, due to the last 'unfortunate accident'.......

Looks like witchcraft to me. Take him to the dunking chair at the north end of the tadpole pond!

You mean the skull - and whatever?? Do you gerdje???

pfff... he doesn't look ill at all !! That is just an excuse to keep all the sweeties for himself .

So that's where I got my cold from! Uncle Adonis! Tell him to disinfect his keyboard.

So Dr./Uncle A has never heard the saying "Physician heal thyself"?????

Pieces of tadpoles not blended!! Something nice to chew on - is it Halloween or not??

What are those little green lumpy things in the brew?

One guess as to what the main ingredient is in that brew..... tadpoles!

What did he cure you two of, anyways? Ever wanting to go back to that quack?