Tina Wooten and the SUN, a wild mustang 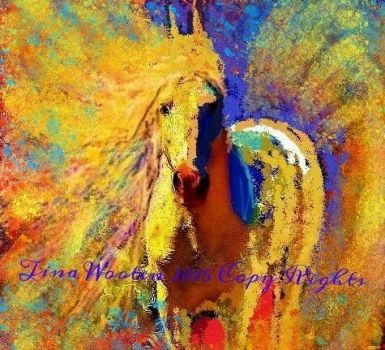 Tina loves the wild stallions and is looking for ways to keep them from being slaughtered, on a weekly basis, illegally with BLM at the head of it all and taxpayers paying it all
Created by babygirl14 Published 16 May 2015
Why this advertisement?

BLM, bureau of land management run by Dept. of Interiors (DOI) involved also with department of agriculture. It is against the law for these wild mustangs (veteran families of war), to be sold to slaughter, but BLM and Dept. of Agri. (DOA), keep allowing it and pocket the money at approx. $.65 per pound with none less than 800#. They are shipped out of state and into Mexico and Canada, passing through DOA all the time. These wild mustangs, donkeys, and burros were given hundreds of thousands of acres to live on in 10 different nw states and BLM and DOA have started gathering the mustangs, donkeys by helicopter, running those to death that just foaled and leaving those new foals behind to die. They are now holding over 55,000 in pens with no shade whatsoever, and just pull them out as they die from heat strokes or freeze to death in the winter cold and snow. Mares that go to auction for slaughter and foal while at the auctions still get sold leaving the babies behind at the auction houses to die. Paul Newman, Willie Nelson and several others have all come together to save them. Taxpayers are paying over 8 million yearly for them to be locked up and die while the land that was given to them is now occupied by cattlemen,

I share Tina's concern. BLM stands for Bureau of Land Management. They seem to be mainly concerned with the cattlemen, who think wild horses are eating grass that their cattle should have.