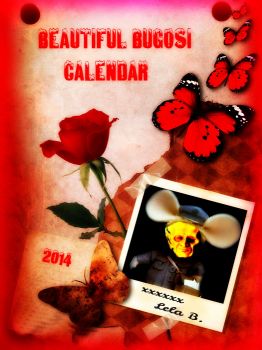 Yes, you read right!.......The non-awaited Bugosi calendar for 2014 is to be presented in user-friendly installments, EXCLUSIVELY TO JIGIDI!!......
Over the next few days, you will be greeted by members of the bountiful Bugosi family, as they unveil the merry and not-so-merry months of the coming year......IN GLORIOUS COLOUR!.....
Today we present the copyright-free cover of your very own FREE CALENDAR!......
Created by lelabugosi Published 9 December 2013

I love it when someone finally gets the joke.

bet they'll all be well hung in CL's house

Maybe that should have read "You" is left out...perhaps...I can't quite decide...

And it fits our souls so well, your heart being so black, and I being such a white knight.

I'm feeling left out! Decidedly left out. Excluded from the group, as it were. Living in "the colonies" as I do I am equipped only with a color printer, whereas your calendar is presented "IN GLORIOUS COLOUR!" Well, I don't have a colour printer. And I just called around to some stores to double-check, and nobody around here has any colour printers for sale! Oh woe, boo-hoo.

Ohhh, I thought it was enough to know that we are in the 21st century!!

You've just made my day, Lela. I get to hang Bugosis (one slimy one in particular), AND you're giving me a free fire starter!

Now where did I put my good lariat?

No...just one particular Bugosi...and Heidi is great with ropes!

wee-yellow-wildflower..........We feel it to be vitally important that people know which day of the month it is, indeed which month we are in at any given moment........therefore, it is a pleasure to inform and entertain at the same time/day/month/whatever.............
precious-pebble.......Every decent household will be hanging Bugosis!

There's gonna be a hangin!!!

I'm not sure we deserve this honor, Mr. Bugosi.

I will need at least 3, one for each of the chicken coops. I'm sure the images will keep them all in line.

Ooh, lovely. Flowers flutterbies and a handsome man. anybody seen my glasses, oh darn I'm sitting on them, thought I felt a prick. and to think it is to be a series, how happy can one person get. I'm bouncing with joy. We're all going to Blackpool (old British joke)

The taped-on personalized picture makes it feel so personal....it's as if this cover was made just for me...