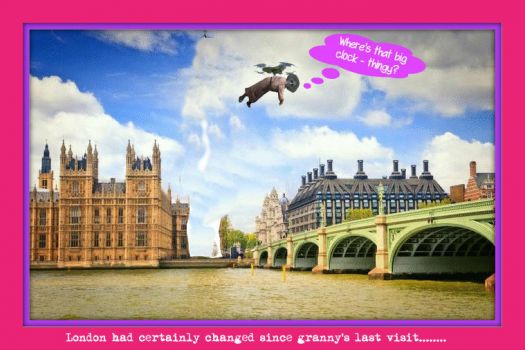 Sweetlittleoldgranny was enjoying a fly-by over London, enjoying the sights, when it suddenly dawned on her that something was amiss......indeed, something was amissing.......
Not only had the impossible happened, but nobody had noticed........for granny was the first to realise that......
SOMEBODY HAD STOLEN BIG BEN!!!!
Created by lelabugosi Published 4 March 2014
Why this advertisement?

I listened to a radio play with Henny Lenry in yesterday. I listen to anything with him in it. My favourite was a series called Rudy's Rare Records............Radio sitcom starring Lenny Henry and Larrington Walker. Three generations of a music-loving family collide in a Birmingham record shop.......... It was very funny but he does straight acting too, even some Shakespeare, just can't get enough of him. I remember seeing his TV debut in 1975 in New Faces and it was so obvious then that he was going to be a big star

Ah yes! Thanks for the clarification........a funny, funny man. The Impressive Clergyman from one of the greatest movies "The Princess Bride."

Not finding anything about him.............perhaps you could furnish some details, please?

Ah, well, now you've brought me back into the discussion when you talk about British TV comedy series. I happen to have an all-time favorite, to-wit: Chef!

Lenny Henry playing Gareth Blackstock, the greatest chef in all of England, possibly the world (in his opinion). He runs Le Chateau Anglais, the finest French restaurant in Britain. He is the quintessential kitchen tyrant with a heart of, well, coal. HIGH-LARRY-US!

Don't forget Peter Cook and Dudley Moore...the very first "Bedazzled" was well ahead of its time in the late 60's.

GGlady yes those were three good ones. To my mind the best British comedy ever was Dad's Army, I don't think it ever got to America. Takes a lot to make me laugh but that does. See that's what I mean, Basil's wife in it was verging on twinset and pearls, but it was done well, his real wife played the waitress in it. Real people even though they were just playing a part. My most hated film of all time was that dreary thing where they met in a railway station and maunged on in those clipped accents all the way through, can't even be bothered to try to remember the title

And junee, I'm with you on Alan Rickman....he does such a wonderful "baddy"...and Anthony Hopkins is superb in any role....and Mirren and Dench...well that goes without saying......

Jeez, lela. Methinks thou doest protest too much. It reminds me of that magician with the idiotic name (Cavid Dopperfield) who made an elephant disappear.

Judi Dench is in a class by herself. Emphasis on ''class''.

Haven't seen many British movies....but several years ago, we were getting several British TV series that were hilarious...."Are You Being Served"...."Keeping Up Appearances"....and, of course, "Fawlty Towers"....I love the British sense of humor....

I do like Stephen Fry, he is very funny and intelligent and another of your favourites I think is Eddie Izzard. the kind of actors I like are Alan Rickman, Anthony Hopkins, Helen Mirren and Judy Dench. Lots more but that's the gist of them

Past favorites were the Goons. .... Peter Sellers, Spike Milligan and Harry Secombe

But why does the Thames look as dirty as the Ganges?

I agree with you, pattysquirt. Naughty lela is just trying to pull the wool over our eyes. Again.

Anybody read Clive Barker's Weaveworld - where the Seerkind collect places and magically weave them into a rug to save them from the baddy? It all reminds me of that

I KNOW!!! Heh-heh-heh! This is easy. Who remembers ? the story about the super-scientist who invented the most awesome weapon of all time, a ray-gun that could vaporize whatever he aimed it at? He demonstrated it to an eastern european power by standing with the heads of government in the capitol city and aiming it at a mountain in the distance. When he pulled the trigger the whole top of the mountain VANISHED, completely gone! They were in awe! Total, complete, abject awe!

Heh-heh-heh................but it was just an illusion. They BELIEVED the mountain would be vaporized, so they THOUGHT IT WAS GONE when he pulled the trigger. It was still there in reality, just like BIG BEN IS STILL THERE, but the power of belief, the fear of the ultimate weapon and their own GULLIBILITY made it vanish before their eyes!

WELL WE'RE NOT THAT GULLIBLE LELABUG!

I think Mr. JM has been eating too many of the wrong cookies!!

And we all know who likes "red post boxes"!!! Is this a "red herring" or is somebody seeking revenge for Rount Mushmore???

This is strictly confidential, but all granny found was a shopping list with the words "Big Ben clock-thingy, Eiffel Tower pointy-thingy, Red post-boxes"...........
That last item could mean something VERY serious!..............

No clues showing from up there SLOG? They must have dropped something while removing Big Ben & the clock tower. I'll check in again to see if any clues or suspects turn up.

All good reasons why I only watch American movies and TV. I guess it's because I'm a northerner and like my accent a bit grittier

This could be the work of that great underground institution the runs the UK from behind the scenes,
the ones they call the Tell A Tubbies. I hear it whispered in hushed circles that their secret leader who hides out as a kitchen chief in Rebmuda. He has struck a deal with the golden ones to secure a time piece for their powerful island goddess. But they have hit a snag, some mysterious foreign arms dealer wants a cut of the profits.

no hope for you if that's the kind of english people you watch, and Julie Andrews oh puleaze!

Navid Diven and Mames Jason are my Britainian ideals, perfected with a significant measure of she-who-may-never-be-spoonerized Julie Andrews (Heavenly Chord playing) thrown in to round out the flesh, so to speak. "Stuffy" is just one of those words that gets bandied about the Brits, is all, Juneee. The actual Brits I've known were good Joes, just as you say!

P-Skewed, you don't have to go to London to visit London Bridge. It is located in the U. S. of A., in Lake Havasu, which is in one of those desert states (not California).

I am just wondering about the yellow water , never seen it so ...
This is NOT Londen , it is a Scene of a Bollywood - film .

Dear Mr Squire if you think the Brits are stuffy you have been watching too many toffee nosed British films about the pearls and twin-set brigade, or **** like Pride and Prejudice. . Most of us are just normal human beings - after all Lela started out as one of us

Plus which furthermore, I notice that when you spoonerize Big Ben, it comes out Big Ben!

For something so large to disappear, the deed must be recorded by the London Eye which is right across the River! Good work granny!

I think it might have been better to lose that giant slumber-land next door..........
Apparently Herlock Sholmes is in his library in Baker street....probably shooting up......

Where in the world is Herlock Sholmes when his services are so obviously needed?!

You caught me out Juneee, just having a little fun with you stuffy Brits! So lela, is that where the famous Harliament Cigarettes are made? And you 7Star, you've been around.......I've seen you out there in Jigidilandia. You finally deign to drop by Bugosiland and claim you're just getting back from your hiatus?

Well, it WAS standing next to the Pouses of Harliament (which are very famous) and served the purpose of helping members of Harliament know that it was soon time for their afternoon nap, as they arrived at the Pouses...........
No clues at all........it has simply VANISHED INTO NOT-SO-THIN AIR!!

oh Mr Squire are you just trying to get me to scream it isn't the Mersey? I think it's your little joke. Actually the outline of the clock can still be seen. Never realized it was that big

It looks rather nice to me - why bring it back if it should be found???

Oh yeah, been on that bridge many times, know exactly what I'm looking at here.

Oh wait! No I haven't! Like most people in the world, I've NEVER BEEN to London! Is Big Ben supposed to be in this picture? Is this even London? Let's have a little HELP here, lelabug. Maybe a chalk outline of the missing tower, or a dotted line, or SOMETHING?????

And what, no SUSPECTS lurking somewhere? No police cars? No ferry on the Mersey River in the foreground? NO CLUES?????

Shhhhhhh! Haven't you noticed I've been away for several months? Hard life I've been living!

maybe if they leave big holes all over London it will turn back into the lovely place it once was, anybody want to buy a bridge?

Thanks for the great chuckle.

Oh no...what an empty space there is! I wonder if they also took Boudicea and her chariot across the street? Who is dastardly enough to do this? I'm going to check out Slimy Roger's Emporium and see if he has it for sale there!!!

I still think it will be found in Scotland, they are gathering stuff before they leave us so they can hold it to ransome