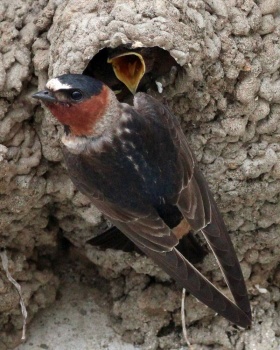 Please send hope and good wishes to the cliff swallow chicks. They are dying again this year. Last year we lost about half of them, probably because there weren't enough insects to feed them. (I've been doing trail patrol for 12 years, and the only other time chicks died was when the mud nests fell apart one year.) I saw seven dead chicks under the 55 nests over the trail Tuesday, but there are still lots of chicks in the nests and the parents seemed to be arriving regularly with breakfast. I'm keeping my fingers crossed that the insects have shown up now. I moved the dead chicks so I'll know if there are more tomorrow.
Created by Ginni2 Published 25 May 2022
Why this advertisement?

A few years ago, I found a dead gull, probably hit by a car, in one of the trash cans. I hauled it out and dropped it in the river too. Crabs and fishes need to eat, and the landfill didn't need it! :-)

That's good news, Ginni.
(And you even fed the crabs.)

Fortunately it isn't as bad as I feared, Patsy. I found 13 dead cliff swallow chicks two days ago, but I hadn't been visiting that part of the trail much and the last time I did visit, I didn't have a clean dog poop bag in my pocket so I could pick up the little corpses and toss them into the river for the crabs to eat. I tossed all 13. When I checked again today there were no dead babies and quite a few of the nests still have two chicks. Last year the nests were either empty or had one chick.

I hadn't realized the insect decline was so drastic. My memories of bugs splatting on windshields and moths around porch lights are from my childhood in Oklahoma, not from my many years in Edmonton and then in Calgary.

Here in Calgary a dry spring this year means fewer mosquitoes so far--great for people, but not so good for critters that eat mosquitoes or their larvae. What I haven't looked forward to: As our climate warms, invasion of insect species and other critters we haven't had to deal with before. I certainly don't want to use insecticides and other pesticides that Oklahomans still use around their homes. ~Patsy

I do know that insects have been declining for years, Don. I'll be 70 in a few months and I remember bugs splatting on car windshields and moths around porch lights. But I've been doing trail patrol at the river park for 12 years. One year the mud was bad, possibly because the race track dumped something in the river, and chicks died when their nests disintegrated underneath them, but last year was the first time they died en masse for no obvious reason. I found a professor who said it was either parasites in the nests, which is unlikely as they build new nests every year, house sparrows killing them, also unlikely as I don't see house sparrows there and the chicks weren't torn apart, or starvation due to a lack of insects. I think more than 50% of the chicks died last year. We don't use insecticides in the reserve, and the plants were just getting bigger last year. This year there is habitat loss because a big part of the reserve across the river is being rehabbed, starting with stripping about three feet of poor soil and all the non-native plants. Then channels will be dredged to bring the river further into the reserve and native plants will be planted. It will be better than ever in a few years, but it's hard on some of the animals, like the coyote I've gotten photos of, right now. I haven't been checking the cliff swallows regularly because it was too sad, but I did go on Sunday and I don't think we've lost as many as we did last year. There were dead chicks on the ground but there seemed to be more chicks in the nests than I expected, and more nests with two chicks. Last year parents were lucky if a single chick survived.

It's disheartening to have to tell you this, but it's not just climate change - insects have gone missing steadily over the last 50-70 years. Pollution, insecticides, loss of habitat, and other factors seem to have dramatically reduced the population of most insects. Insect populations aren't easily or widely studied, but the loss has been noticeable if you think about it. Remember driving on back roads and seeing the insects in the headlights make it look like it was snowing? The cloud of moths which collected around porch and street lights? Insects bouncing off your face or getting in your mouth when you were biking? Having to regularly wash your windshield to remove those stubborn insect carcasses? These are gone, and long gone. Scientists investigating this issue call the general observations the "windshield effect".

Going back to places in which population studies were made many years ago are finding that the current population is only a fraction of what they measured previously, both in species and in numbers. In places at least, half or more of the insects are simply gone.

Great shot Ginni! Thanks!
(I'm way bejind with solving today, but I've got some nice stuff to post.)

I'd like to give them some food too, Ardy. If they were seed eaters, I might be able to, but not insects.

I hope the insects listen to you, canoekaw!

I haven't read anything about the insects, Patsy, but there were five more dead chicks this morning. One was tiny and featherless and the rest were bigger.

Another lovely photo, Ginni. I'd love to be able to send them some insects but don't know how. Thanks, Ginni. I can and shall pray that they will have what they need. 🙏

Come on insects, time to be bird food.

Wonderful photo, worrisome news.
What's the theory for the late arrival of insects?

Here in Alberta we're getting some different insects thanks to climate change--some welcome, some very unwelcome. And we're losing some, including pollinators. It never occurred to me to wonder if the birds are finding enough food.