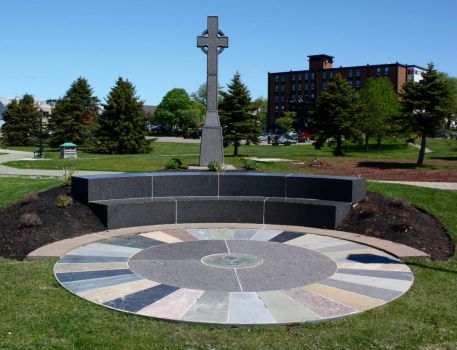 The Monument to the Irish settlers of PEI. The circle originally was made up of stone from each county in Ireland. Read what happened after it was vandalized:

In June we travelled by rail from Vancouver (British Columbia) to Montreal (Quebec) where we spent five nights. We then took an overnight train to Moncton (New Brunswick). Next we drove to Prince Edward Island, Cape Breton (Nova Scotia), and flew home from Halifax.
Created by gemstone Published 22 September 2019
Why this advertisement?

All the more power to young Greta!!!

President Dwight Eisenhower wrote books about the military-industrial complex and he warned about their wanting wars.

I'm afraid you're not wrong here, Faye....money and power corrupts...it's always been like that and it will probably never change :((

Years and years ago I read a book by Taylor Caldwell called "Captains and Kings". It was fiction but based on a lot of research that had "Captains of Industry" plotting where to start the next war so that they could make millions and millions in the arms trade...nowadays, billions and billions...and I think the plot is even more obvious today...

Hear, hear, Ank and Faye....we had an old American friend who, already years ago, was so fed up with everything that's going (wr)on(g) is this world, she claimed "I'm glad I'm on my way out of this world"!

Right on, Ank...and me, too. But I do worry about my lovely great nephew and niece...❤️❤️❤️

The games and TV. And mums should have to think before they gave their kid a gun to play with. Parents don't have time to raise theur kids, it becomes worse and worse. I'm often glad that I'm not born in this time.
Hugs ♥♥♥

Thank you, Marilyn. While I realize that there are many factors that create thugs...I really do feel that the violent video games have desensitized kids over the last 20 years.

I am so sorry that happened to your Uncle, Gemstone. That is horrible. I am so glad we have cameras everywhere. I think we are catching more people that previously kept robbing and hurting people until finally if ever caught. I read an incident in today's paper how they caught a murderer by using security cameras in Topeka. I am seriously thinking of having cameras installed. I do have my daughter's giant bulldog who scares people who knock on my door and don't know her.

Eight years ago a beautiful young East Indian woman...full of hope and promise...was gunned down by her ex-boyfriend in the university parking lot as she walked to her car at night. "If I can't have you, no one can!" It took 2-3 years to prove that he killed her and he was given 21 years in prison without parole. Last week her family was told that he was given an accompanied day parole to attend his grandmother's funeral. HER grandmother will never see Maple again!

It's awful, Faye. I don't know why she didn't insist to call an ambulance, in an interview she said she offered him a glass of water, but all he wanted was to go home. At home he told his wife he was assaulted and around 4PM he became unwell and an ambulance was called. They did CPR but sadly he died anyway. I mentioned 4 boys in total, but there were 5....after the first boy had given himself in 4 others (in the age of 13, 14 and 15 years old) got also arrested. Police is still investigating whether his death was the 'direct' result of the assault.
Not so long ago around that area another (younger) man was also assaulted by a group of young boys, they've broken his jaw and the Police is investigating whether this has been the same group or perhaps other members of the group. In the meantime those 5 will stay in a police cell!
Their indentity is kept hush hush, but I'm sure if it would've been authentic Dutch boys they would've mentioned it louder than loud!!!! So we all suspect it's about the same group of a certain nationality(!) that is terrosising shopkeepers and customers in that area. There's a school nearby and at least the boy who gave himelf in, is a student of that school!!

What happened to your uncle is also too bad for words! Poor man! I'm sorry they never caught the person responsible for what he did to your uncle.

I don't know about Canada, but here in Holland punishments are way too mild for the crimes they have committed!

That's terrible, Impie. A simple trip to the PT and how many lives are lost, or changed forever? All because of arrogance, stupidity, and perhaps parents who didn't do their job...and blows to the head...I wonder why the PT didn't call an ambulance. Such a shame. At least one family did the right thing. I can't help but think of that poor man's wife, children, grandchildren, brothers, sisters... My uncle was beaten in his own apartment, hog-tied, and it took him three hours to get loose. He was 75 and he's lucky he didn't die at the time...his jaw had been wired due to previous cancer surgery...he had broken his nose as a kid, and the thief had stuffed a pair of pants in his mouth. It took all of my uncle's effort just to be able to breathe. There was a methadone clinic up the hill...so we're pretty sure it was an addict.

One wonders what those vandals were thinking....and what goes on in their heads when they read the articles. If they'd have any concensience they'll come forward and own up.....


Totally different from this.....In The Hague, (for your information 2 streets from your Marriott Hotel) last week a 71 year old man, coming from PT, asked some boys who were blocking the pavement, to move aside. They refused and an argument started on which the boys started to hit the man in his face and on his head. The man managed to escape and went back in at his therapist and told her he was attacked by those boys. She told his nose was bleeding and he was bruised and injured to his head, but he was able to go home by himself, where he, a few hours later, died!
Of course it was on the news and the next day one (14 year) boy gave himself in and the other 3 are arrested also. They are 4 boys in the age of 13, 14 and 15 years old!!!!!!!!!!
What is the world coming to, I ask you.
Back in the old days as a senior member one could 'speak' to a junior and they'd hang their head in shame..... but today....."it's getting harder and harder to die of natural cause, overhere!!! "

I thought that, too, Ardy. People are often willing to designate funds for a specific cause, particularly if it's a permanent restoration acknowledging our past...to remind the future. ❤️❤️❤️

If contacted the Irish counties might have been willing to replace the needed stones. If asked individuals might have been wiling to put up funds to do it right. Seems like the planning people had many options they did not explore. But repairs have been done. People just have to think the stones represent a certain county but not necessarily from that county. Thanks, Faye. Too bad the perpetrators aren't known.

Right...and I agree with the comment that the vandal should be tracked down and have to pay for all the damage...plus police/court costs for tracking him down...it is not a large island.

Obviously the contractor is not sensitive to others sense of pride in their country and or countries of origin.