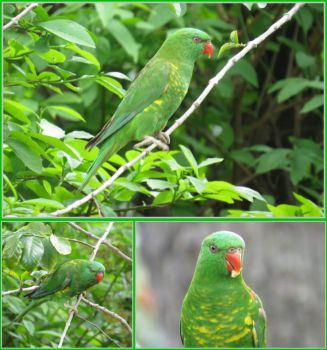 We had a pair of them visiting the bird feeder on Sunday morning - the first time we'd seen them since last December!
They are called 'Scaly-breasted' because the yellow feathers are arranged like fish scales on the breast area. They're slightly smaller than the Rainbow Lorikeets - who were being bossy as usual - and not letting them onto the feeder at the same time.
Created by robryan Published 15 September 2014

Thanks for replying Jacki - your climate sounds very similar to Oregon, where a couple of Jigidi friends live:))) Yes - our birds are colourful, and noisy:))). Janet (who also posts bird pics) lives about 4 hours drive from me and has lots of beautiful birds visiting her garden too!
Tomatoes and peppers sounds like a nice thing to be buried in - our tomatoes are priced through the roof right now - they're in between crops in different areas of the state and in short supply for while!! I don't blame you for not looking forward to winter - ours are very mild here - no lower than about 5C - 40F minimum and usually sunny and around 20C - 68F max!! We don't get frosts either - so it's very easy to take!!! Thanks!!

i live in western washington state. we are considered a zone 7. not too cold in the winter (usually) but it rains most of the time. we have many beautiful birds but not as colorful as those i see posted by people in your area. i have big gardens and right now i am buried in tomatoes and peppers. also trying to clean up my huge flower bed so i can (what else) plant more. i'm not looking forward to winter.

Thanks snooker, Suzy, Ank, Dave:)))) and IF!! With their back turned they were pretty hard to spot in the trees - but I got a real thrill spotting them:))))

Beautiful photos, robryan. Their colors sure blend in well with the vegetation, but the orange beaks make them pop out just a bit.

Florrie, snooker, I'd sa....NO NO NO...I'm staying out of this one! :)) They blend into the greenery very well, Robyn. If you hadn't pointed it out, I wouldn't of thought of Lorikeets but I see it easily now. It'll be fun to see what all shows up at the new feeder!

Way to put it into words, Florrie! :)
These are a bit different than the other lorikeets you have posted, Robyn.

LOL, Florrie. Me either.
They are very bright looking birds even if they don't have the rainbow's color.

Thanks Jana - Layla cat likes to sit very still under a nearby tree and she watches everything:)))) Not even her tail moves:))) When the Crested Pigeons walk around eating the seed off the ground she stares at them - and if they get close she chases them!! Luckily she hasn't caught any birds ....yet!!!! She is too well fed - but it is just a cats' instinct to hunt:)))) Thanks Jana - and have a nice day!!

I love your visits to the feeder. Great photo, thanks Rob.
What does say your cat to these visits? ♥☺

Thanks Shirley - I was lucky to spot them among the Rainbows - but was so glad I did:))) I really like their sleek look!!

This is only the second time we've spotted them Janet - but since joining Jigidi and getting a decent camera - I seem to notice lots more details like them:)))) Now we've got Nev on the job we might see more:)))) Thanks :))

We see these only occasionally, Rob. Yes Nev, they can be down your way according to my bird book, so keep your eyes "peeled." Even thought they are much smaller that the Crested Pigeons and Galahs, the Rainbow Lorikeets boss them off the feeder. Fabulous pics thanks, and hugs, janet.

Not as colourful as their mates the rainbows, but just as noisy, always know when they are around, nice to see then, Rob, Thank you.

Thanks Marian - another Aussie bird for you:)))

Thanks Laura - yes, the scales are a bit more subdued than the Rainbow's bright colours!!!

Thanks Barb - I really like the red beak too - it stands out more in theses birds!!!

Thanks Floyd - my pleasure:)))

Hi jacki2 - I live in Brisbane, Australia. It's Spring here and all the Azaleas and Camellias are in full bloom - along with lots of other shrubs!! We have a sub-tropical climate so have a mild winter:)))) Thanks for commenting - it's really appreciated:))) Where do you live?

Thanks Nev - I'll have to look up their range - I did that in December, but can't remember if they are found around Sydney!! Lucky you for seeing Rosellas - i haven't seen any here!!! Thanks!!

beautiful birds. where are you that you have what appear to be tropical birds and azaleas blooming now, if i'm not being too nosy?

Always great to see your birds.
Thanks Rob.

What an amazing looking bird, Robyn! Love the "scales."