Nicholas Chevalier (1828-1902) Australian Portrait of Miss Winifred Hudson as a Young Girl, seated at a piano, her doll nearby, 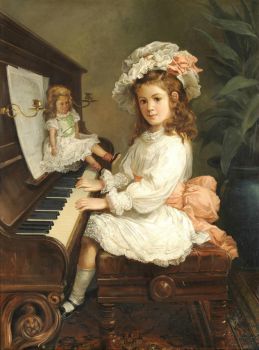 Chevalier was born in St Petersburg, Russia, the son of Louis Chevalier, who came from Vaud, Switzerland, and was overseer to the estates of the Prince de Wittgenstein in Russia. Nicholas' mother was Russian. Nicholas left Russia with his father in 1845, and studied painting and architecture in Lausanne, Switzerland and at Munich. The materials used in this painting are oil paints on canvas.

In 1851 Chevalier moved to London and worked as an illustrator in lithography and watercolour. He also designed a fountain which was erected in the royal grounds at Osborne, and two of his paintings were hung at the Academy in 1852. Further study in painting followed at Rome. In late 1854 Chevalier sailed from London to Australia on board the 'Swallow' to join his father and brother, and arrived in Melbourne on 25 December. In August 1855 he obtained work as a cartoonist on the newly established Melbourne Punch. Later he did illustrative work for the Illustrated Australian News and also worked in chromolithography.

He accompanied explorer/meteorologist Georg von Neumayer on trips to remote areas of Victoria, and the material gathered on such journeys resulted in some of his most recognised pieces of this period, including his painting of Mount Arapiles in Western Victoria.

In 1864, when the National Gallery of Victoria was founded, an exhibition of works by Victorian artists was held. The government agreed to buy the best picture exhibited for £200. Chevalier's oil painting The Buffalo Ranges was selected, and was the first picture painted in Australia to be included in the Melbourne collection.

In 1865 Chevalier visited New Zealand, travelling widely and doing much work there which was exhibited at Melbourne on his return. In 1869 he joined HMS Galatea as an artist with the Duke of Edinburgh, on the voyage to the East and back to London with stops in Tahiti, Hawaii, Japan, China, Ceylon (Sri Lanka) and India. The pictures painted during the voyage were exhibited at South Kensington.

In January 1874 Chevalier was commissioned by Queen Victoria to travel to St Petersburg and paint a picture of the marriage of the Duke of Edinburgh. Chevalier made London his base and was a continual exhibitor at the Academy from 1871 to 1887. He had one picture in the 1895 Academy but had practically given up painting by then. Chevalier died in London on 15 March 1902.

Chevalier married Caroline Wilkie in 1855, a relative of Sir David Wilkie, who survived him. Chevalier was a man of much personal charm and spoke fluent French, English, Russian, German, Italian and Portuguese. He was a good amateur musician being second violinist in the Royal Amateur Orchestral Society which had been started by officers in the Galatea and in which the duke was first violin.

In 2011 Nicholas Chevalier was the subject of a major survey exhibition and publication, 'Australian Odyssey', mounted by the Gippsland Art Gallery, and subsequently toured to the Geelong Gallery, Victoria.
Created by Dollcollector Published 10. May 2019