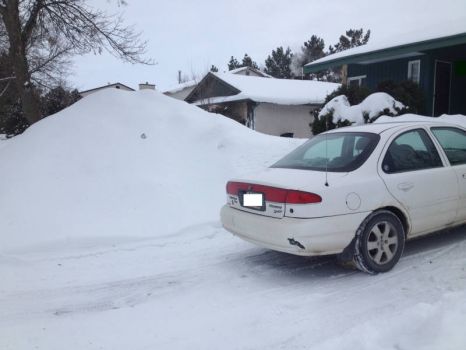 I don't blame you for thinking that, PD. It's what I think about places that get tons of rain. As I explained to foxy, I needed you all to see all this snow. Perhaps you'll remember it when you (and others) complain next winter when you get snow. It's funny to me when you all complain about the snow cause I know it won't last and will soon be gone. But it's all what you get used to. This year we received a lot more snow than usual, but it's not unusual to have five foot piles of snow in the front.

The snow is mostly white because we did get some fresh stuff last week. But soon, the snowbanks along the streets will be a grimy mess and really ugly too look at. I think that's the worst part of spring.

foxy, if the Rockies moved east, they managed not to knock over any infrastructure. We always have a lot of snow, but this year we had more than usual. I needed to share these pictures so that people could see I wasn't kidding about the accumulation here. And since it's cold all winter, our snow doesn't melt during the winter, it all accumulates!! Hibernation is something I do quite well :)))))))

I'm afraid to make any comments, because the only thought that keeps going through my mind while looking at these photos is: "Better you than me, kid!".......! OMG, that is a LOT of snow!

When I was on the phone with the Geek Squad tech, she told us that she was from Kentucky, and they had gotten a LOT of snow as well--so much that there were still traces of it on the ground from the snowfall 3 whole days ago.....! I had to laugh at that, just as you must laugh at what I think of as the LOT of snow that I get... :-)))))))

Did the Rockies move east a ways?

Hooley Dooley, I could not and would not live there for all the tea in China, my friend! It hurts even thinking about breathing in that frigid air. Hibernate, I say!