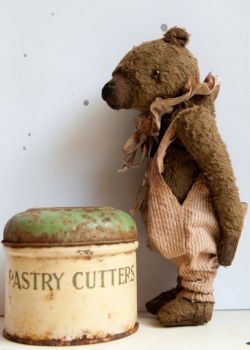 Good for you jeri. Patricia is certainly missed been a long time now.

Patricia, I know I spoke about this bear on another of your puzzles thinking he was a very early German import. just to say when I met my wife she had a very scruffy bear called "Travel" when we were married I then understood why his name was so called because when we went on holiday the bear came as well. He is now more than worst for wear and has travelled thousands of miles Manly by himself in a suit case he is a cloudy yellow/ blond colour now and is left in a cardboard box now and stays at home now when we leave the UK. LOL!!!

Indeed they do Megabelle. I see we are kindred spirits.

what a lovely thing to say, thank you, ripuz! Ah the Velveteen Rabbit.....wonderful message...they do come alive when we love them, don’t they!!!

Megabelle, I'm sure your gift will be very meaningful when they see who is giving it to them.

Merry Old Fashioned Christmas to you and those you love.

Patricia, at the end, I wish the little boy had known it was his old Bunny

“Real isn't how you are made,' said the Skin Horse. 'It's a thing that happens to you. When a child loves you for a long, long time, not just to play with, but REALLY loves you, then you become Real.'

'Does it hurt?' asked the Rabbit.

'Sometimes,' said the Skin Horse, for he was always truthful. 'When you are Real you don't mind being hurt.'

'Does it happen all at once, like being wound up,' he asked, 'or bit by bit?'

'It doesn't happen all at once,' said the Skin Horse. 'You become. It takes a long time. That's why it doesn't happen often to people who break easily, or have sharp edges, or who have to be carefully kept. Generally, by the time you are Real, most of your hair has been loved off, and your eyes drop out and you get loose in the joints and very shabby. But these things don't matter at all, because once you are Real you can't be ugly, except to people who don't understand.”

yes, we need to get back to those simpler and more wonderful Christmas times.....we have scaled back this year to one gift, well, maybe two, for each person and that is it!!! Hopefully they are also more meaningful!!!

Patricia, I guess I was thinking about a simpler life and time as being when hand made pastries were a labor of love (lost now to the supermarket shelves of ready-mades), and as giving a single gift like a teddy bear and knowing that it was not only enough but that it would be cherished as well. This one sure looks like it's has a lot of hugs and kisses and for some strange reason, I want to make a pie? (❛ᴗ❛)

When arrived in England, I had never heard of Paddington Bear! I'll look out for the dvd, Megabelle - thank you.

I just recently watched Paddington, a dvd I found at the library....it was wonderful!!! I’m sure you have seen it, but if not, do!!

If you saw all my collection of Steiff - and other - animals, you would think I was a bit potty. I must photograph them one day. The majority are still at my mother's (bigger) place.
Thank you all!
Rosie: you say 'simpler times', but I am almost certain that this bear has survived one, if not two World Wars!

Reminds me of a simpler time and a simpler life somehow. I love it when you capture days gone by, Patricia.

Patricia... will you please take a picture of all your bears...would love to see them...

will you post a photo of your “new” one??

what a wonderful collection you must have!!! love this one’s outfit!!

Thank you, Megabelle. I have just taken delivery of a pink mohair Steiff collectors' bear, but I still have all my old bears and even one that belonged to my grandfather.