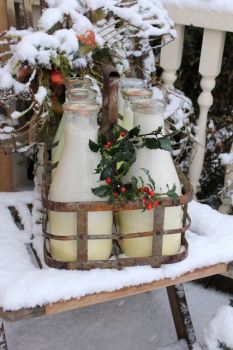 spencersmom has not been around for ages.

Hi Jeri, yes I remember Rosie sadly not with us any more.

Remember Rosie..? She is on the comments below.

Well she lives in a posh part of London in Notting Hill as her Mother and young man does also.
Her flat is number 2.

I've a British friend who Also misses clotted cream since she can't get it here in the US. Do recall the tops popping up also. Pretty picture.

Thanks to all the 40 Thieves for a cheery Christmas greeting!

That would explain it!
I adore Cornwall.

He was from Cornwall. No wonder he missed having it.

Hello Keith!
What a wonderful story, Rosie. Thank you for sharing it with us. Keith was evidently a wonderful human being and much loved.
Cornish clotted cream is the very best and wonderful on scones with strawberry jam.
The cream at the top of the bottle is what we use in Turin to make 'bicerin' (I posted a puzzle of it at Biscotto) - espresso, chocolate and cream.

We had a dear elderly friend from England who moved here to the U.S. He said he did so miss something he called clotted cream which he made in England but said he could not make here because he needed to use the cream from the top of the old fashioned milk where the cream rose to the top of the bottle. He said he tried using regular heavy cream like we use for whipping cream but that it just wasn't the same. He always did this at Christmas and he was truly sad each Christmas when he was unable to reenact his tradition.

I was telling a friend I was visiting in Ohio just before Christmas one year about him. About how he was ill and how he still missed his clotted cream tradition and how it made me sad too. Such a little thing that used to bring him such joy and fond memories.

My friend became very excited and said that there was a dairy close by and we needed to go see if they could help somehow.... so off we went. Imagine how happy I was that they had what he was talking about. I bought a little ice chest and drove home with this precious package, put it in the refrigerator and on Christmas Eve I wrapped it up, put a big bow on it and took it over to him. I have never seen such joy when he realized what it was. He made his clotted cream Christmas Day. We lost him the following year.

This puzzle, Patricia, brought it all back to me in one big rush of bitter sweetness. He was like a father to me and I miss him so but I'm very happy he got to have his treasured clotted cream one last time.

I think you were meant to post this puzzle. I think I was meant to see it. I don't believe in coincidences. I think it was my dear sweet Keith's way of saying hello. I think I am very weird!

I have never had milk delivered here in London, but I have seen robins pecking through the foil caps of milk bottles that were on the doorstep awaiting collection!
I used to go and fetch the milk from our neighbours in the Black Forest in a container that looked a bit like a milk churn - fresh from the cow. They kindly taught me how to milk a cow when I was 6. I love cows!

Who remembers when the milk would freeze and the cardboard caps would
push up with the frozen cream under it....?? My sister and I would break it off
and eat it like ice cream....And our Mom would yell at us.....memories.....
♥ ‿↼