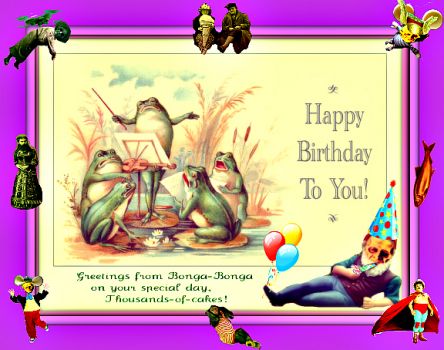 Well, it appears to be that time of year again......Hope you're having a great day!
Created by lelabugosi Published 19 September 2015
Why this advertisement?

I'll get there in a couple of days!

The BBAF is on the way!

Here I come
To save the daaayyyyy!
That means that Mighty Squirt
Is on the waaayyyy!

Don't worry, Hanne. The denizens of the Okefenokee are friendly, for the most part. Just don't let Howland Owl sell you a do-it-yourself home dentistry kit.

I'm sure psquirt must have a spare rocket launcher somewhere that he might use as a stick to rescue Hanne-sans-pipe...

Can someone with a stick, help Hanne-with-pipe out of the mud-swamp?

BIG EVENT at the Bugosi Recreation Center. Everyone is invited!

I heard somebody, it may have been Pogo, yelling from a distance that we were the enemy.........whatever that meant!

If it's quicksand, Hanne, I think you're supposed to try swimming...if it's the Tad...just try drinking it as SLOG will be along pretty quick and you'll soon be high and dry!

Ever see Pogo, Albert, or any of the others in the Okefenokee, Patty?

I spent a lo-o-o-o-o-ng night up to my neck in the great Okefenokee Swamp during U.S. Army Ranger training, Hanne. Had to cross part of it to complete our mission. It was hard going but not that scary and nobody drowned. ☺ ☺ ☺ Which is more than I can say for our host, who has apparently drowned in an ocean of Tadpole Wine!

a girlfriend in every airport then?

Oh Wainthorpey.....let me wind your propeller.....even though I am just a young, innocent girl, I am so experienced at propeller winding......

My dear Wainthorpey......when I am in the OR handling DrAC's intruments I am drawn to his wonderful professional manliness......but.....you know how exciting it is when we are up in the air....and when we are doing the loop the loops....my heart is yours.....

Just like Roger! It must be an inherited gene in the jeans!

.....wherefore, whitherto, and henceforth, my eye did wander slightly hitherto......for an instant......

Oh Wainthorpey, you told me I was the only one.....I can't believe how your eyes wander.....

mother-with-little-martini.......Very swampy indeedy - that's why Engelbert of Humperdinckle left home.......
Tom-minus.......I don't know why he took the shovel, as there are no worms in France - they were all eaten by snails, in the 12th. century......

Mrs. Humperdinckle was very upset when young Humpy went off to France....he took their one and only worm-digging shovel with him......which meant they were obliged to use their pancake turner.....and Mrs. Humperdinckle does not want us discussing her gritty pancakes!....

Yes, Tom-minus........in fact, one of the Humperdinckles emigrated to France, where he became quite a celebrity due to his bell-ringing skills.......
dark-messenger.......No, they have no need for curtains, as they are away all night......

You forgot to mention the Humperdinckles have no curtains in their houses.

You learn something new every day...

The Humperdinckles were a family of hunchbacks who made their fortune digging up and selling earthworms for fishing bait, as fish was the chief export of the Upper Silesians......

Well, after one of his ancestors, to be correct......Originally named Engelbertsland, after Engelbert of Humperdinckle (a small village in the swamps of Upper Silesia).......

Does this mean that England was named after Engelbert Humperdinck?

It was Denmark, named after King Dennis and King Mark of Spain (they were twins).......

To help fill the interminable intervening, interstitial, interlocutory and interceding time between puzzles with an interjection of interesting intercourse, I offer the following for your amusement:

This was an actual question on the American daytime version of the game show “Who Wants To Be A Millionaire?”

Colonized in the 16th century, what country took its name from the first name of the king of Spain?

And even though he was an American, the contestant got it RIGHT! Can you imagine? I mean, how did he know, or do you think he figured it out on his own? ☺ ☺ ☺

I am shocked! Crows would never do that!

nice soft landing for them

They pooped in my hair!

precisely, but it is happening in real over here

we are now advised not to feed seagulls as they are increasingly attacking people. I was mugged by one on Iona and it nicked my sandwich

What no cake and no ice cream?
If weren't for the singing frogs and dancing red pants this party would be a bust.

Sorry about the cake, thousands-of-cakes......it would seem that Kaleidoboy was attacked by a flock of seagulls, who promptly ate what was left of it......also, as well, too, in addition, the fish ice cream melted in the sun.......

Happy Birdy to you Joyce now where is that fish ice cream!

A big smiling thank you kaleidoboy,Faye, Pat & Hanne for all of your good wishes. :))))
That's a great story. I think they should allow clear top boxes to go through. There'd a lot less crumbled cookies & other goodies. Of course you'd have to use a hard plastic cover, not plastic wrap!! :))
Thanks bunches again everyone ... that includes you too lela with your musical frogs!!

Although the U.S. Post Office no longer accepts packages such as this, 30 or 40 years ago a mother mailed her son a birthday cake complete to the icing and candles, and it arrived in perfect condition. How was that possible? She cut out the top of the box and covered it in clear plastic wrap! Every postal worker who handled that package could see the birthday cake inside! Since the first one hadn't smashed the cake, the second one certainly wasn't about to, nor the third nor the fourth..............nor the very last!

Good thing Jan sent so many cakes...looks like the whole famn damily has arrived...including the red herring! ;)))

Great b'day card/puzzle; Love it!!! Who can resist listening such music. I see everyone came to the party, I'm happy to see everybody.
Thank you for the birthday wishes & great card lela! :))))))
time, 1:44
Thank you all, Jill, June, Jim, JM,Heidi, ThomasCat & Edna, for your wonderful birthday wishes!!! :))))))

Happy birthday, Joyce , I hope the cake will not have swamp/mud decoration ...

Kaleidoboy is in charge of the cakes.......let's just cross our fingers that he didn't get carried away......

Yes yes a great card, love the singing frogs and the balloons, happy birthday and all the best ... now where's the cakes?
You said there was cakes... I see fish and ice cream.

ooh, the frog chorus for your birthday how lovely